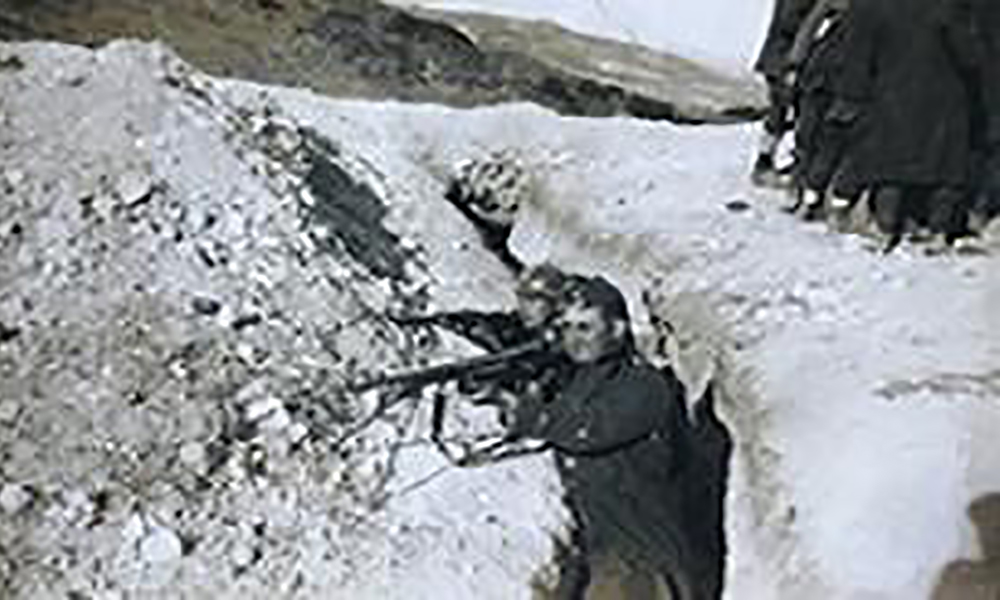 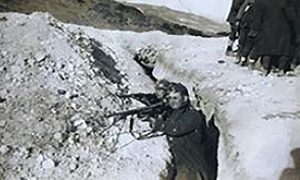 Biographical History: Robert Arthur Stradling is professor emeritus of history at Cardiff University, Wales, and a leading authority on the Spanish Civil War.  He has published extensively on the topic and made a number of documentaries for Spanish television and BBC Wales.

Archival History: Collected by Professor Robert A. Stradling between 1992 and 2000.

Scope and Content: The material in this collection was sourced by Professor Robert A. Stradling for his book The Irish and the Spanish Civil War 1936-1939, published in 1999.  An intimate view of life in Spain for the Irish Brigadiers can be gleaned from some of the written material, which includes photocopies of diaries, memoirs, correspondence, and routine orders. An entry in the diary of Tralee-man Tom Hayes, Legionnaire in ‘D’ Company, dated 15 December 1936, provides an account of the journey to Lisbon on board the German ship, the S.S. Urundi, noting ‘In bed all day very sick… Weather is bad… A lot sick one man broke leg other scalded when ship swayed…’ (P13/1/1/3/1).  Photocopies of routine orders, many of which were originally typed out by Matthew Beckett of Westport, county Mayo, offer an insight into the daily life of volunteers after they reached Spain, addressing areas such as divine service, casualties, decease in strength, transfers, promotions, inspection of equipment, cleanliness and parades (P13/1/1/5/3).

The memoirs of Matthew Beckett, who served as Legionnaire in ‘C’ Company, offers a harrowing account of his company’s first night in Badajoz, stating ‘In Badajoz we had the first glimpse of the kind of war we were going into… It bore the marks of war on many buildings – blood-stained walls, scribbled mottoes on buildings… The Church had been used a stable for the mules during the Red occupation and it was badly marked & statutes burnt and defaced.  A number of nuns from the adjoining convent had been tortured and shot’ (P13/1/1/5/10).  One of a series of letters home from a young Brigadier with ‘C’ Company, Patrick Hickey, reassures his mother about his drinking habits in Spain, ‘…we get paid every week and we spend on grub and cigs, I never touch the drink now it is only a cod getting drunk out here you need your head where I am…’ (P13/1/1/2/3). Possibly one of the most poignant documents in the collection is a copy of the autograph book of Lieutenant Tom Hyde of ‘A’ Company, the first casualty on the side of the Irish Brigade. The document is a testament to the popularity of this man from Midleton, county Cork. Amongst the many warm messages from his comrades is one from General Eoin O’Duffy himself, recorded after Hyde’s death in February 1937, which reads ‘To Tom in Heaven. You were the first to join the Brigade, you were the first to give your life for this cause which the Irish Brigade is fighting for’ (P13/1/1/6/1).

The photographic component of the material includes a collection of original prints from James Roche, a photocopy of the collection of Joseph Cunningham, and mostly photocopies of images of other Irish Brigadiers including Matthew Beckett, Leo McCloskey, Diarmuid O’Sullivan, James Finnerty, Patrick Hickey, and Padraig Quinn. The James Roche collection contains views of life at the garrison at Cáceres, the trenches in Ciempozuelos and La Marañosa. One of the most moving images in this group is that of the body of Lieutenant Tom Hyde after an attack at Ciempozuelos (P13/1/2/1/3). The oral material consists of a series of sound recordings of interviews conducted mainly by Professor Stradling between 1994 and 1996 with Irish Brigadiers, their families and friends, and addresses issues such as what prompted them to join the Irish Brigade, their experiences in Spain, and their views on the recognition received by the Brigade on their return from Spain from the church and the state. William Geraghty, from Dublin, attempts to explain his reasons for travelling to Spain by stating the following, ‘…in my limited learnings of the history of the friendship that existed between Spain and Ireland and all that Spain tried to do in the sad times my forefathers experienced, the Spanish Armada, giving sanctuary to the O’Donnells and all the rest… I felt indebted to Spain for their kindness to… our ancestors’ (P13/1/3/3).

Administrative documentation includes military dispatches, telegrams, correspondence, and memoranda in English, Spanish, French and Italian, addressing a range of issues such as the arrival of the Irish Brigade, Irish casualties, the hospitalisation of Irish Brigadiers, disciplinary problems, the behaviour of General Eoin O’Duffy, the dissolution of the Irish Brigade and arrangements for repatriation, the issue of minors serving in the brigade, and the activities of Irish Independent journalist Gertrude Gaffney. A photocopy of a telegram from Mussolini in March 1937 contains a message of support for the Irish Brigade, which translates as follows ‘Let the Legionnaires know that I am following hour after hour their action and it will be crowned by victory’ (P13/2/1/2/5).

Media coverage consists of newspaper articles printed before, during and after the war. Of particular interest is a series of articles produced by Special Correspondent for the Irish Independent, Gertrude Gaffney, giving an account of the day-to-day experiences of the Irish Brigadiers (P13/3/1/1/1-2).  Post-war coverage includes articles in numerous Irish newspapers, with some items on the International Brigade (P13/3/1/2/1). It also addresses other published material including books, periodicals and other sources (P13/3/2/1).

The major strength of the Robert Stradling Collection is the fact that it successfully assembles documentation relating to the role of the Irish Brigade in the Spanish Civil War from a range of different sources, in Ireland and Spain. This body of material provides a number of different perspectives on the war, including the personal accounts of the Brigadiers, the official documents of the administration of General Franco and the Irish Brigade, and the views of the media at home and abroad. In addition, it provides access to copies of material that in many cases remain in private ownership today. The emotional impact of this collection cannot be underestimated. The official documents of the Irish and Spanish administrations provide an insight into the mechanics of war, whilst the diaries, memoirs, photographs and sound recordings provide a rare glimpse into the thoughts, feelings and actions of those men that followed General O’Duffy to Spain. This is a rich body of material that will provide a valuable source of information to researchers in Ireland and abroad.

System of Arrangement: The material is divided into four main series.  Series 1 contains documentation sourced from Irish Brigadiers, their families and friends, and includes written, photographic and oral material.  Series 2 focuses on administrative documentation, mainly between Franco’s administration and that of the Irish Brigade.  Series 3 focuses on media coverage of the Spanish Civil War in Ireland, with some examples from foreign sources. It consists primarily of newspaper articles printed before, during and after the war.  Series 4 contains letters from donors and related material.  Each series is broken down further by document type, names of Brigadiers and thematic headings. These are listed in chronological order.

Conditions Governing Access: Unrestricted access to most items.  A small number of files contain personal information relating to living persons and are closed for fifty years to protect individual privacy.

Language/ Scripts of Material: Predominantly English; some items in Spanish, French and Italian.  Translations of Spanish material were made by Dr Barrie Wharton of the Department of Languages and Cultural Studies, University of Limerick.

Physical Characteristics and Technical Requirements: Mostly paper documents and photographs in good condition.  Items P13/1/3/1-8 require a cassette player and are too fragile to be safely handled.  Digital access to contents is available in the reading room – please check with a member of staff.

Existence and Location of Originals: This collection comprises primarily photocopies of material sourced from surviving Irish veterans of the Spanish Civil War, their friends and families. In addition, copies of documents were assembled from numerous library and archive services, including the Archivo General Militar at Ávila, Archivo del Ministerio de Asuntos Exteriores (Madrid), Archivo General de la Guerra Civil Española (Salamanca), National Library of Ireland, and National Archives, Dublin. The oral accounts were recorded during visits to Ireland in 1994 and 1996, with the exception of the recording of Jimmy Kavanagh by his son, James, in 1992, and the Radio Éireann interview with Phil McBride in 1986. A large quantity of published sources was also assembled and reproduced, including newspapers, books, periodicals and magazines.

Publication Note: This material formed the basis for Professor Robert A. Stradling’s publication in 1999, entitled The Irish and the Spanish Civil War 1936-1939.