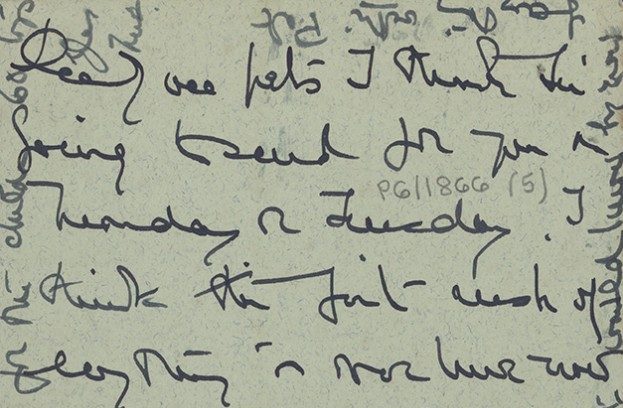 Welcome to this lesson on reading and understanding archival diaries.

The lesson outlines a number of steps on how to start deciphering unfamiliar handwriting, where to start contextual research and how to follow leads, and how to transcribe archival diaries.

How to cite this resource

It takes time and patience to easily read a new handwriting style, particularly one that uses words, phrases and formatting that differs from modern handwriting styles. Reading handwriting is a learned skill, and cumulative experience over time definitely helps when approaching any handwritten document. This lesson outlines a number of common words, phrases, abbreviations and ligatures that may appear in personal diaries in the nineteenth and early twentieth centuries.1

However, it is important to remember that handwriting is unique to each author, so it may take time to familiarise yourself with a certain style. Moreover, even the handwriting of a familiar author can depend on a number of factors, including:

This lesson breaks down a number of different techniques to help you begin to decipher the handwriting and follow any potential leads you uncover using archival diaries in your research. Test your skills using the exercises at the end of this page.

2. What is archival transcription?

There are many reasons to transcribe archival documents. It can take a lot of time to read different forms of handwriting, and by taking your own notes from the document, you are ensuring that you are creating an accurate record of that document to consult at a future date, which you may go on to publish as part of your research, or share with other researchers to make their research journey easier.

There are many different types of transcription. Verbatim transcription aims to transcribe documents precisely as they appear, i.e. replicating the full content of the document, including any spelling mistakes or errors, as well as the exact format of the document. Conversely, edited transcription involves producing a mediated version of the original document, i.e. correcting spelling mistakes or errors, tidying formatting, or even omitting any extraneous elements.

Depending on your research question, it is best for you to transcribe archival documents verbatim while in the reading room – this ensures that you have not omitted any important pieces of information or clues that may be useful to you in the future.

It is important that while undertaking archival transcription, that you simultaneously consider three key elements:

Archival transcription concerns the textual content of documents: it involves reading and understanding the handwriting in a written document, and transcribing it into a new document, either digitally or by hand, so that the content is easier to read, find and access.

Palaeography, on the other hand, is the study of writing systems themselves, as well as the dating of historic documents by analysing the types of writing used. Common types of writing forms in Irish and English archives and libraries include old Irish script, majuscule and miniscule writing in Latin, and ‘secretary hand’, a form of writing used by the professional classes in the 16th and 17th centuries.

3. Getting started with archival transcription

1. Open a new Word document or blank sheet of notepaper
Count the lines on the document and number the corresponding lines on your blank page.

Step 1: Study the document initially for types of handwriting and formatting

Step 2: Number each line to break the document into smaller sections

3. Try to read document through once to get a feel for the it – what portion of it can you understand from this initial read-through? Can you get a general idea of what the document is about?

4. Begin to roughly transcribe the document verbatim, or the portion of it you can easily understand:

5. Background research is vital in understanding both the context and content of the document. It can help you to work out unusual or incorrectly-spelled words, and will ultimately help you to better understand the document. For more on where to start with contextual research, click here.

The meanings of different types of abbreviations depend greatly on the context of the document, as well as the time period it was written in. A sample of common nineteenth century formatting and abbreviations are outlined below.

Investigating the context of a record not only helps you to better understand the document, but the additional information you come across may help you to work out previously unknown or hard-to-read words while conducting archival research. For more on the importance of critical thinking while conducting archival research, see related lesson on Archival diary as object: interpretation and critical analysis

It is important to ask yourself the following questions:

UL students have access to a variety of genealogical and biographical databases through the Library website. Make sure to log in through the Library homepage, then navigate to Explore Collections > Databases A-Z to find the relevant source, i.e. Ancestry.com, the Irish Newspaper Archive, the Irish Times Newspaper Archives and the Oxford Dictionary of National Biography.

Which Massy? Verification through land ownership records
At first, we were unsure of the location mentioned at the top right-hand side of the first page of Massy’s diary. We thought it said ‘Rosanna’, but were unsure. As we knew Massy, the diary’s author, originated in Co Tipperary, a quick check of Google Maps did return a townland ‘Rosanna’ in Tipperary, but we still didn’t know if this was accurate. Further investigation was needed.

Next, we tried the placename database Logainm.ie, but unsually, the townland was not returned here, and nor did it appear as a registered townland during the 1901 or 19011 census.2

Our first breakthrough came from the Landed Estates Database. While there are a number of Massys listed, through a process of elimination, we were able to identify that Massy was associated with ‘Grantstown Hall’, as well as another holding at Rosanna, Co Tipperary. This entry also provided a number of significant further details about Massy:

Looking further into the Grantstown Hall estate revealed the name of Massy’s brother, Henry W Massy; the Landed Estates record states that by 1894, the estate was the seat of a General William Massy; that the estate was associated with the Massy family until at least 1906; and that the estate remains extant and occupied today.4

The map and coordinates available through the Landed Estates Database confirm the location of the townland of Rosanna from our initial Google Maps search was correct.

Tracing the extended Massy family
Using these identifying details, it was now possible to trace Massy through a number of different genealogical records. Through IrishGenealogy.ie, we were directed to the National Archives of Ireland Genealogy website, and were able to find Massy’s will, containing his date of death, 20 November 1895, as well as the name of the executor of his will, Anna Massy, Spinster. His will also stated that Massy served as a Major in the Tipperary Artillery. IrishGenealogy.ie also directed our search to the General Registry Office (GRO), where his death certificate revealed that he died as a result of ‘cardiac failure’ at Grantstown. Massy’s death was also recorded in the Dublin Evening Telegraph newspaper, 23 November 1895.

A search on Wikipedia gave us the name of one of Massy’s sons, Lieutenant General William Godfrey Dunham Massy (1838–1906). Another search using the Cambridge Dictionary of Irish Biography built on this, disclosing the name of Massy’s wife to be Maria, while the Oxford Dictionary of National Biography revealed her maiden name to be Cahill.

ThePeerage expanded our knowledge about Massy’s family, outlining: the names of Massy’s parents, Reverend William Massy and Elizabeth Evans; giving the date of his marriage to Maria Cahill as February 1838; stating that he also served as a JP (Justice of the Peace, or Magistrate) for counties Tipperary and Limerick; and the names of his eight children (including one of his daughters Anna Massy, the executor of his will). This material was alternatively available through a search of the English census, which further recorded Massy and his family lived in Kensington, Middlesex, in 1861, and at Lee, Kent, by 1871.

The research journey outlined above demonstrates the investigative nature of archival research, as well as the importance of following any clues within the document, to learn more about the context and content of the material you’re looking at. In this case, our research confirmed the location of where the diary was written, and gave us much-needed contextual information so we could better understand, and therefore decipher the handwriting contained within, the remainder of the diary.

The Special Collections and Archives Department at UL do not hold general genealogical records, such as records of births, marriages and deaths. The best places to begin your genealogical research include:

The best way to learn archival transcription, is by doing it for yourself! See how many of the below excerpts you can transcribe accurately and fully. Click the questions below each exercise to reveal the correct answer.

How many lines of writing do you see?

The answer is FIVE, not three!

How many expenses can you identify?

What is the word partially obscured by the inkblot?