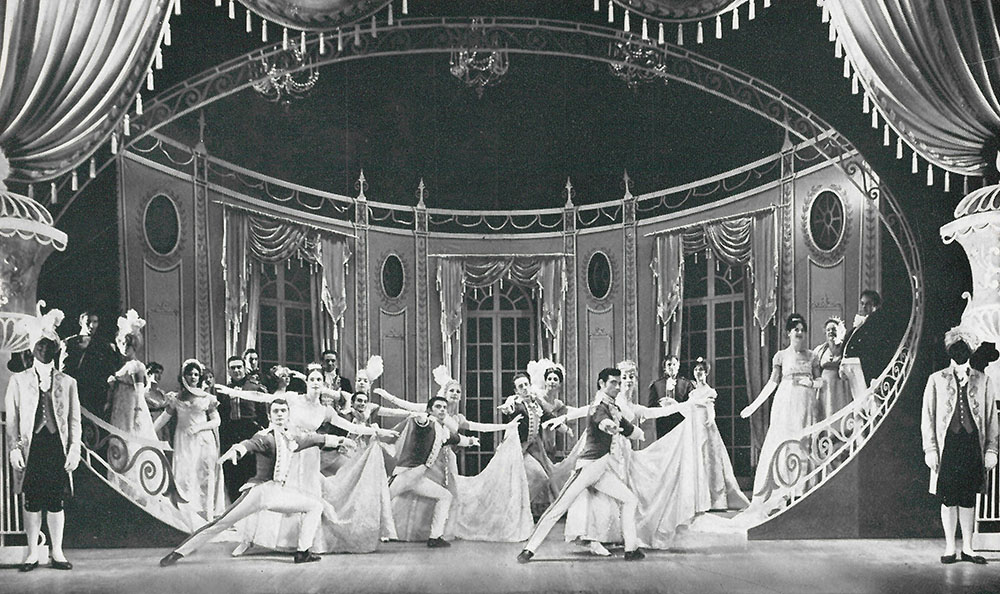 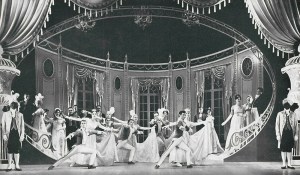 Pantomimes, musicals, and other theatrical productions form an essential part of the festive season. With live Christmas shows unlikely in 2020, this post takes to the collections of the National Dance Archive of Ireland (NDAI) for a look at performances of yesteryear and some of the colourful characters who entertained Irish and other audiences in the twentieth century.

Hilton Edwards (1903–1982) and his partner Micheál Mac Liammóir (1899–1978) were among the most prominent figures of the Irish twentieth-century cultural scene. Co-founders of Dublin’s Gate Theatre in 1928, they became known for their inventive and experimental productions. At no point was inventiveness in higher demand than during the Second Word War, when a shortage of new plays and just about everything else limited thespian activities. In 1942, instead of the traditional Christmas pantomime, the Gate Theatre presented its audiences with Jack in the Box, a revue-style potpourri of ‘something old, something new, something borrowed, but not something blue’. The programme included musical performances and extracts from Shakespeare, Oscar Wilde, and Hans Christian Andersen, among others. The highlight of the night was Thirst, a play by Myles na gCopaleen, which, Mac Liammóir confessed, made him laugh ‘till the tears came… even at the seventh rehearsal.’ 1

Equally exceptional was the Christmas pantomime put up in 1945–46. Instead of unbridled musical comedy, the Gate staged a rendition of Prunella, a romantic play by Laurence Houseman and Harley Granville-Barker first published in 1906. Micheál Mac Liammóir played the leading male role of Pierrot, with Maureen Cusack (1920–1977) as Prunella. The Irish Press described the show as ‘a startling Christmas offering in which a tear trembled behind every smile’. 2 The sentiment was echoed by the Evening Herald. The play, the newspaper declared, ‘is something very much out of the ordinary, something well worth seeing. A political phantasy of delicate charm, it treats of a life and love and art in a manner that stirs the imagination through its ever-changing moods.’ 3

Jack Cruise (1915–1979) was one of the twentieth-century icons of Irish theatre. His acting career began with amateur drama groups and culminated in a full-time career in Dublin’s Theatre Royal and the Olympia Theatre. In addition to acting, Cruise produced numerous scripts for Theatre Royal’s weekly revues. Many of the Olympia’s famous Christmas pantomimes were also penned by Cruise, whose musicality and comic talent lent itself ideally to this form of entertainment. Cruise’s pantomimes were of the classic variety, in which the principal lady played the part of the principal boy and vice versa, and which abounded in corny jokes and slapstick comedy. The pantomime of choice at the Olympia in 1964 was Aladdin, with the then nineteen-year-old singer Patricia Cahill in the title role and Chris Curran as the villain Abanazar. Jack Cruise began the pantomime in the role of Wishy-Washy, an Irish export driver, but underwent a number of transformations in the course of the play, including an irreverent impersonation of James Bond in a parody of the recently released blockbuster movie, Goldfinger. The pantomime enjoyed immense popularity and ran until 6 February 1965, providing ‘magic and music in sizeable portions’ and ‘an enjoyable Christmas pie for children of all ages.’ 4

Cahill, Curran, and Cruise also teamed up at the Olympia in 1965, when the traditional pantomime was replaced by a variety show called Christmas Crackers. The programme featured miniature ponies, cowboy horses, and Tricky Terriers from Fossett’s Mini Circus, a scene from Snow White, songs from My Fair Lady performed by Patricia Cahill as Eliza Dolittle, and an Al Capone-style version of Charles Dickens’s A Christmas Carol. 5

Irish-born dancer Norman Maen (1932–2008) created choreographies for many of the Christmas performances in London’s West End. However, not all of these expensive productions enjoyed unmitigated success. In December 1962, the Queen’s Theatre staged a musical, Vanity Fair, loosely based on William Makepeace Thackeray’s novel of the same name.

Although the production enjoyed seventy performances to packed audiences, critics loathed it, none more so than David Nathan, whose scathing review was published in the Evening Herald:

Vanity Fair has only one distinction. It has discovered hitherto unknown gradations of dullness which culminate in an all-embracing, unique and numbing monotony… The lyrics by Robin Miller, the book by Mr. Miller and Alan Pryce-Jones, the acting – by nearly everyone and the dancing reach a level of drabness surpassed only by Julian Slade’s music, which is diabolically dull. None of the singers can act and none of the actors can sing. This is barely noticeable, as none of the songs has a tune and most of the dialogue is unspeakable. 6

Much more successful was the pantomime Cinderella staged by the London Palladium in 1985 and directed by Norman Maen. This rags to riches fairy tale is one of the most popular pantomime scripts of all time, alongside Aladdin, Dick Whittington, Jack and the Beanstalk, and Snow White and the Seven Dwarfs. The Palladium’s 1985 production broke the pantomime mould by giving the role of the Prince not to a woman as tradition would dictate, but to Paul Nicholas, star of the British sitcom Just Good Friends, and that of Cinderella to Sarah Payne. However, gender-crossing roles were not forgotten. Peter Lambert and Willie Ross entertained the audiences as the Ugly Sisters, and their costumes, ‘particularly the shocking-pink poodle look-alike and a horrendous wedding dress cake’, caused enormous hilarity. 7 A wonderful time was had by all!

We wish our readers a Merry Christmas and a Happy New Year, with many pantomimes to come!