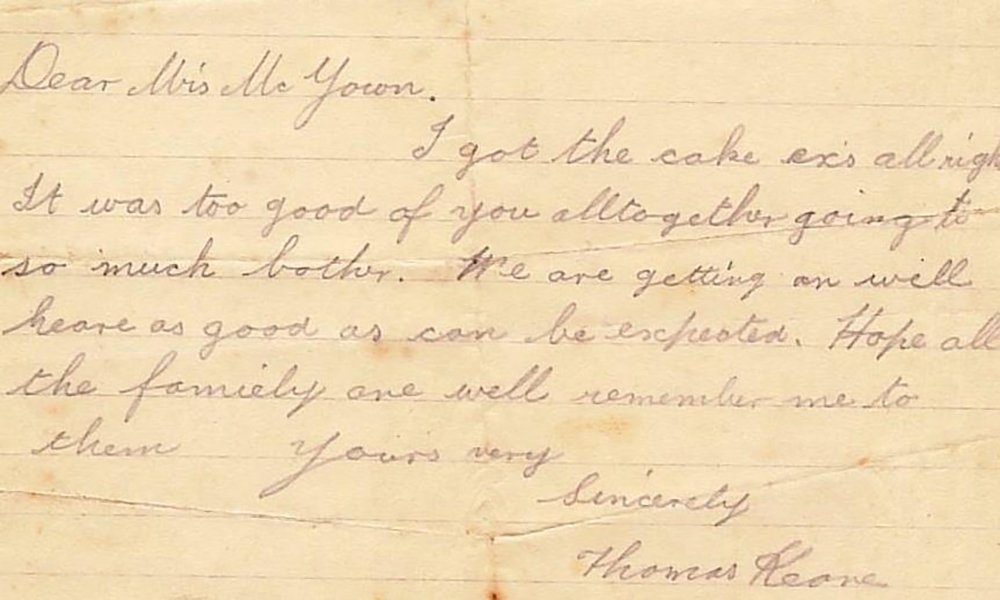 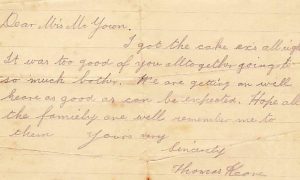 Administrative/ Biographical History: Anne (Annie) McGowan née Browne (1879-1965) was the daughter of Patrick Browne, a baker, and his wife Susan, of Clare Street, Limerick.  In 1900, she married Michael McGowan (1878-1942) whose father Daniel McGuane (1843-1920) was originally from Poulwillian, Miltown Malbay, County Clare.  Daniel, a tailor, had come to Limerick in the 1860s with his wife Mary Anne Foley, a seamstress from Kilkee, to run a business premises on the corner of Catherine Street and Roches Street.  When in Limerick, Daniel changed the spelling of his surname from McGuane McGowan.

Michael McGowan worked first on the railway in Limerick and later in Inchicore Works in Dublin.  In 1915, he joined the Royal Dublin Fusiliers seeking adventure and an escape from the large family he now had to take care of.  Michael was sent to the Western Front where he was poisoned by gas and evacuated to a hospital in Birmingham.  He was discharged from the Army in 1919.  His wife returned to Limerick during the war and lived with her children in Doyle’s Cottages off John’s Street, which was not far from Limerick Jail.  In order to support her mother, Anne’s eldest child Sarah (Sally) got a job as a printer’s assistant in McKern’s Printing Works in Limerick city and, on her mother’s insistence, joined the Transport Union.  When Sarah and 11 other girls were offered a pay increase of two shillings and six pence on condition that they leave the Union, Sarah was the only girl to refuse the offer as a result of which she was sacked.  She later worked as a waitress in a Catherine Street restaurant.

During and after the Civil War, Annie and Sarah McGowan and Annie’s son Timothy (Tadgh) McGowan delivered food and parcels of books, magazines and cigarettes to Republican prisoners in Limerick Jail and continued to send these to prisoners transferred to the Curragh internment camp in County Kildare.  Given the family connections with West Clare, most of the prisoners they assisted were from that area.  One of the correspondents, Thomas Keane, was from Carrigaholt, where a Keane’s pub exists to this day.

Immediate Source of Acquisition: Donated to the University of Limerick by Seamus Harrold on 22 October 2013.

Scope and Content: The archive contains a selection of letters and notes written by Republican Prisoners imprisoned in Limerick Jail and the Curragh Internment camp between 1922 and 1923 during and following the Civil War. They comprise in the main thank you-notes for parcels delivered to or sent to them by Annie McGowan, her daughter Sarah and her son Timothy.

System of Arrangement: The documents have been arranged alphabetically by sender’s surname and thereunder chronologically by date.