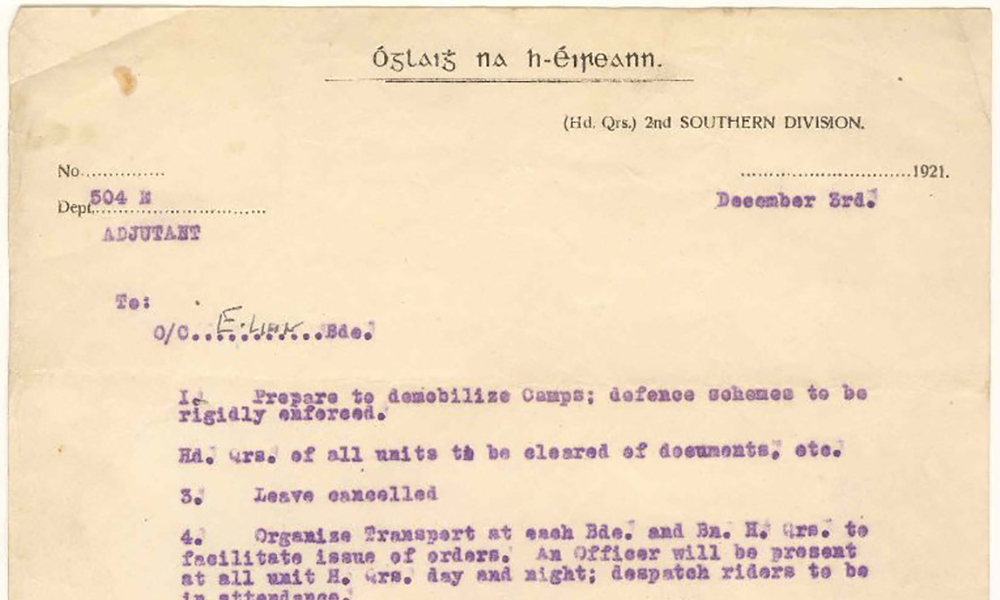 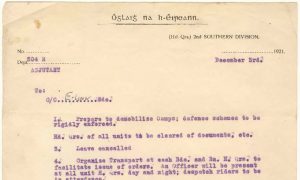 Biographical History: Maurice ‘Moss’ Twomey was born in Fermoy, County Cork, on 10 June in 1897.  He was educated by the local Christian Brothers.  He joined the Irish Volunteers on its formation in 1914 and proved to be an able recruit.  He quickly rose to the rank of Battalion Adjutant Fermoy Battalion by 1918.  By 1919, he had attained the rank of Brigade Adjutant to the Cork No. 2 Brigade of the Irish Republican Army (IRA).  By 1920, Twomey was a staff officer on the general staff of the 1st Southern Division.  He was heavily involved in operations during the War of Independence.

After the Anglo-Irish Treaty and during the Civil War, Twomey was a staff officer to General Liam Lynch.  He was a member of the occupying force in the Four Courts in 1922, the action that precipitated the Civil War.  He had however left the building before it was bombarded by the Free State Army.

Following the Civil War, Twomey was tasked with the entire root and branch reorganisation of the IRA, including the West Clare Brigade.  Twomey succeeded Frank Aiken as Chief of Staff of the IRA in 1927, a post he would hold until 1936, when he was interned by the De Valera Government.  While incarcerated in the Curragh Camp, Twomey argued with the IRA leadership concerning its policy of supporting Nazi Germany and resigned his position as Chief of Staff.  Upon his release, Twomey left the IRA but remained sympathetic to the Republican cause.  He subsequently opened a general confectioners and newsagents in Dublin, which became a centre for Republican activities.  Maurice Twomey died in Dublin of a heart attack on 8 October 1978.

Archival History: This set of documents was originally part of a larger collection of papers discovered in a derelict shop in Dublin which had once been owned by Maurice Twomey.  The collection, comprising in the main material collected by Twomey while acting as Chief of Staff of the Irish Republican Army, was broken up and put forward for auction in separate lots.

Immediate Source of Acquisition:  Purchased by the Special Collections and Archives Department as a single lot at an auction held at Adam’s Auction Room, St Stephen’s Green, Dublin, on 20 April 2010.

Scope and Content: The collection consists of manuscript and typescript biographical accounts of Volunteers and civilians who died during the War of Independence and Civil War and who had links with the West Clare Brigade IRA.  The accounts provide detailed information concerning the birth, early education and military career of each individual.

The collection illuminates a turbulent period in Irish history stretching from the later decades of the nineteenth century until the end of the Civil War in 1923.  The inclusion of biographical details of Volunteers who were killed during the Civil War while fighting on the anti-Treaty side makes it historically significant, as information of this nature was rarely recorded.

System of Arrangement: The documents have been arranged in alphabetical order by individual surnames.

Rules or Conventions: This description follows guidelines based on Irish Guidelines for Archival Description, 2009; National Council on Archives: Rules for the Construction of Personal, Place and Corporate Names, 1997; and EAP Guidance on Data Protection for Archive Services, 2018.