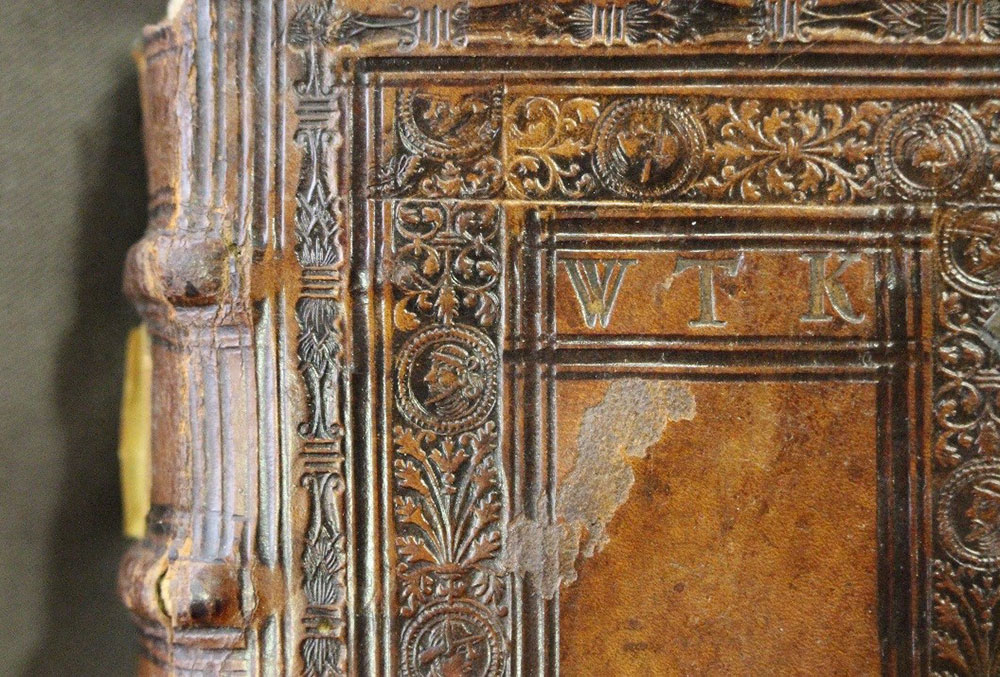 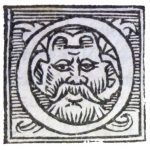 ne of the great strengths of the Bolton Library – and a source of endless delight for this cataloguer – is its bookbindings. Admittedly, they have suffered somewhat over the centuries: all spines are a tad degraded and torn, and any blind- or gold-tooling thereupon largely rubbed – damage typically sustained by covers over time as they protect the precious textblocks inside – but the quantity of contemporary binding in evidence across the collection is nonetheless impressive.

It has been beautifully decorated with cameos, or heads in medallions, an assortment of which borders an empty central panel.

The front cover bears the initials of its former owner WTK, dated 1597, provenance which is borne out inside by a full signature: Wytzo T’a Kaminijga Ao. 1597. This is most likely Wytze van Cammingha of Friesland 2, a province of modern-day Netherlands.

Metal clasps are also in evidence. Clasps were commonly used with wooden boards into the 16th century to prevent cockling 3. As the use of wooden boards waned, so too clasps were replaced by ties and thongs. 4

The lower-upper cover direction in which the metal clasps close confirms that this is a Benelux or German binding, as opposed to being French or English in origin, where the upper-lower direction was preferred. 5

Librarians and cataloguers of old were often wont to ignore or sacrifice such copy-specific information – those bits and pieces in, on and about an item which are unlikely to be associated with any other copy in existence, such as the cameo binding and 1597 provenance seen in this example – in favour of the simplified ‘book list’ approach to the describing collections, and the catalogues produced about the library at Cashel were scarcely different. This is understandable, for reasons of economy and speed: compare this item’s concise two-line entry in the 1873 printed catalogue to the detailed 40-line exposition by yours truly for the Glucksman Library’s digital catalogue, a catalogue not constrained by concerns of bulk or shelfspace, paper or ink costs.

The cataloguing project underway at the University of Limerick, therefore, aims to produce the most complete catalogue of the Bolton Library to date, describing not just the printed works and manuscripts themselves, but also for the first time presenting comprehensive paper, provenance, bookbinding and fragment detail in evidence throughout the collection. This is what we term a ‘whole artefact’ approach, where we have ceased to simply list the books, but describe every facet of what are now unique objects in the Bolton Library.

Please follow our blog if you would like to see more of the wonderful, largely contemporary, bookbindings in the Bolton Library. You can subscribe using the links on this page.