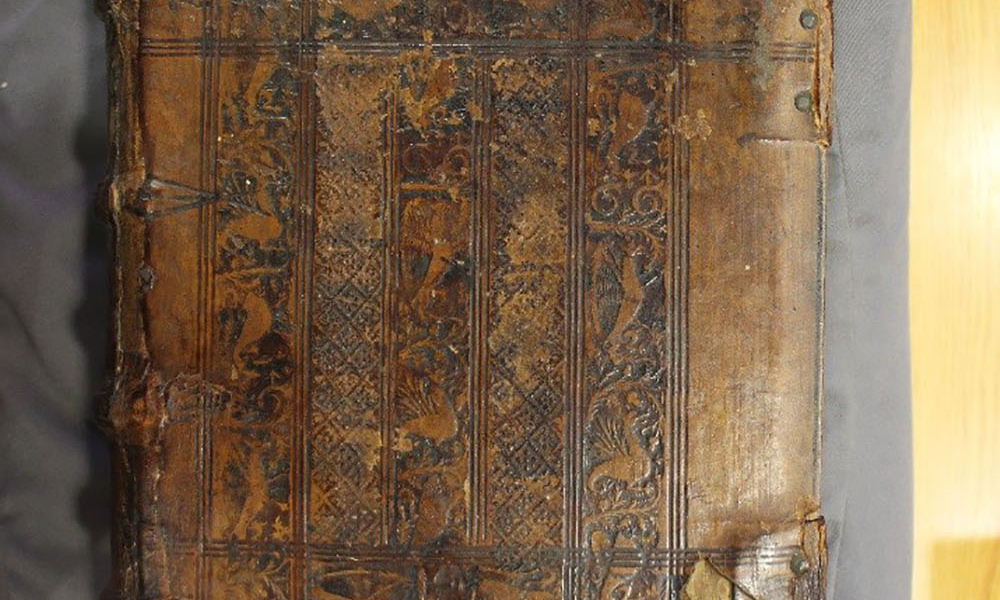 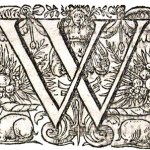 We present two examples from the Bolton Library’s fine bookbinding collection this week.

First, we have this sumptuous early 16th century blind-tooled1 roll2 binding in brown calfskin over wooden boards, the work of the Cambridge-based bookbinder Garrett Godfrey (–1539).3

The wood used here is most likely oak, which was favoured in northern European bindings, as opposed to the beech more typically found in southern European examples.4

Two vertical rolls, separated at the very centre by a truncated creatures roll, bear the popular diaper7 design, here infilled with small flower motifs, the whole framed by a trio of blind fillets.8

This creatures roll is very similar to that used by a contemporary Cambridge binder, Nicholas Spierinck (-1545 or 1546) and “It seems evident that this roll came from the same cutter’s hands as that used by Godfrey.”9

There are the remains of metal clasps on the foredges, closing from upper to lower boards, a fashion which underlines the binding’s English origins.10

The binding has been rebacked11, but this should not take away from the pleasure of viewing such a fine example.

Froben, a man acknowledged with having consolidated Basel’s position as the book trade powerhouse of the region, was known to have employed such up and coming names as Hans Holbein the Younger (1497–1543) to illustrate his commissions. Holbein, yet to become a portrait painter of some renown, was a young artist still finding his artistic feet in Basel at the time of the printing of this book,12 and has been credited with its accomplished and very informative title page.13

Froben also had a successful, collaborative relationship with Desiderius Erasmus (1466–1536).14 Erasmus was a fellow countryman of Garrett Godfrey, and stayed with him while studying in Cambridge in the 1510s.15 This connection may have secured for Godfrey the commission to bind this Froben publication in England a few years later.

Also printed in Basel, and almost certainly bearing a near contemporary binding, is De sphæra (Basel : Heinrich Petri, 1561). Its binding, as in the example above, bears the ever popular diaper design, here employed in an all-over fashion and infilled with an interpretation of the ‘flowers in a vase’ motif.

It covers the cosmographical thoughts of Proclus (approximately 410–485), Cleomedes, Aratus, and Dionysius, here printed by yet another big hitter on Basel’s book trade scene, Heinrich Petri (1508–1579), a man who would actually marry into the Froben dynasty before the end of the decade.16

Sadly, however, the maps for which Petri’s printing house was famed are wanting here in the Bolton Library copy, having been neatly removed at some point.

Are these three unique broadsides?

War, mayhem and trouble with tenants in the letters of Thomas White

Archival outreach through teaching and learning

We use classes, workshops and visits to highlight and promote our holdings to encourage the use of our material in academic endeavours and research.