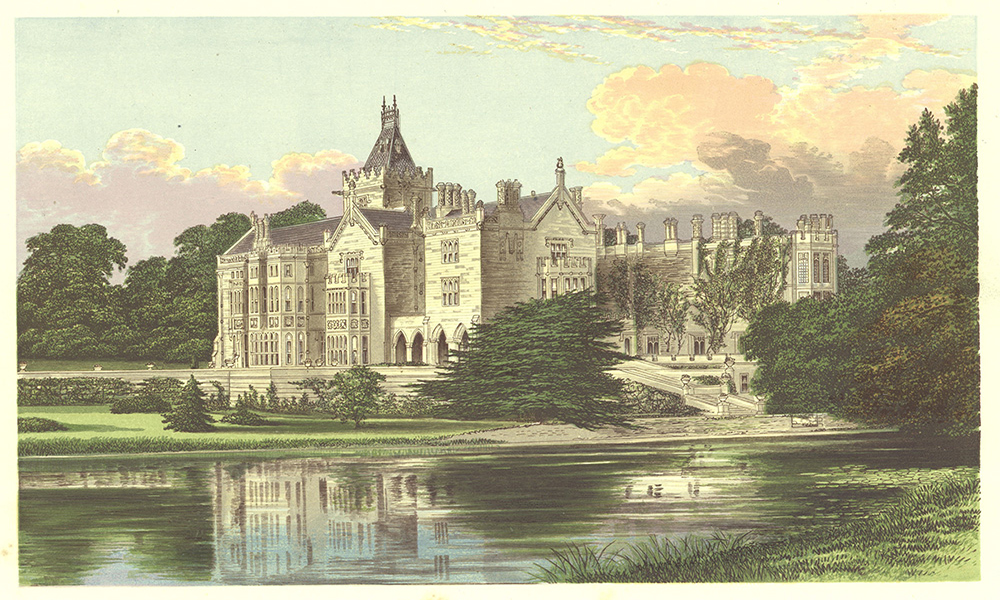 As Countess of Dunraven, Caroline Wyndham-Quin (née Wyndham), wife of the 2nd Earl of Dunraven of Adare Manor, County Limerick, had plenty to converse with herself about! Born in 1790 as the second child of politician Thomas Wyndham of Dunraven Castle, Glamorganshire, Wales, the early deaths of her other siblings made her the sole heiress of her father’s fortune. She first encountered her future husband Windham Henry Quin after he was elected as a Member of Parliament representing County Limerick and spent a notable amount of time in England. The couple married in December 1810 and had three children. In 1832, they began building Adare Manor, a Gothic revival house, a project that took many decades. 1)

Caroline kept a diary from the day she turned eighteen years old in 1807 until 1870. 53 of her diaries are preserved in the Dunraven Papers [D3196/E]. Alongside annual ‘reflections’ and voluminous letters, her diaries document more than sixty years of her life and are an outstanding feature of the archival collection. The content is largely social and personal, detailing her social round, family events, and building plans. The principal places of writing were Adare, the principal seat of the family, London, Dunraven Castle in Wales, and at other Wyndham properties.

Even though the green bookbinding of the small 8vo diary looks neat and well-cared for, it does not make an extravagant or special first impression. A look inside, however, reveals an abundance of carefully documented days in the life of the Countess of Dunraven. Every page is ruled with lines, each containing a manuscripts report of one day, with the date given at the top left corner of the entry. The differing colour intensity of Caroline’s writing suggests that she wrote all her entries with pen and ink. Fading ink as well as her cursive handwriting sometimes make the task of deciphering her entries a challenging one.

In her 2011 work on ‘The research value of the journals of Caroline Countess of Dunraven and how to optimise their research use’, Anna-Maria Hajba emphasises the utility of diaries in terms of the research on ‘activities and relationships in particular groups in society’. 2

Caroline’s diaries lend themselves to studies of her own activities and her relationships with her husband and relatives, but most interestingly, with her servants and those employed around her home and on the landed estate. It is, in fact, the ordinariness of events recorded that makes this source especially interesting for research. Reports of days spent by visiting friends and family or driving to town are sometimes interrupted by accounts of her charity work and evenings spent with her servants:

[24th of Nov. 1838] We were in a grand bustle the whole morning … in the evening the Monsells came, we had the most delightful merry eve, from having a full dress rehearsal of the play.  We had the stage all lighted, & the servants in to look at us – & we were all very merry. 3

In general, it seems as if the servants and family at Adare Manor were strongly involved in each other’s lives. Festivities such as the birthdays of the younger family members, St. Patrick’s Day and Halloween were celebrated together in the kitchen downstairs.4

In January 1838, Caroline painted a picture of the annual New Year’s ball attended by servants and employees as well as Lord and Lady Dunraven:

[10th of Jan. 1838] In the evening the servants had their annual ball, which went off very well, the kitchen when lighted up looked so handsome that it seemed quite a pity to use it as a kitchen[.] it had quite a baronial appearance, when lighted and decorated.  L[or]d D[unraven]. & I staid down till near 12.  I […] danced down a dance with young O’Neil the painter & enjoyed seeing all the people so cheerful.5

This excerpt indicates that the event was held by candlelight ‘down’ in the kitchen that was decorated and evidently configured for dancing.

The diary references to servants and their involvement in the life of an Irish country house are so fascinating to read, since there are hardly any sources produced by the servants themselves. Contrary to a perception that servants at the Irish country house were invisible or overlooked, Caroline speaks most fondly of her servants and evokes the image that servants in Adare Manor were not only regarded as part of the household but as part of the broader family circle.

Pat Armstrong gives us a first-hand account of what life was like for one Irish soldier in the First World War through his letters home to his mother.

Bookbindings of the Bolton Library #2