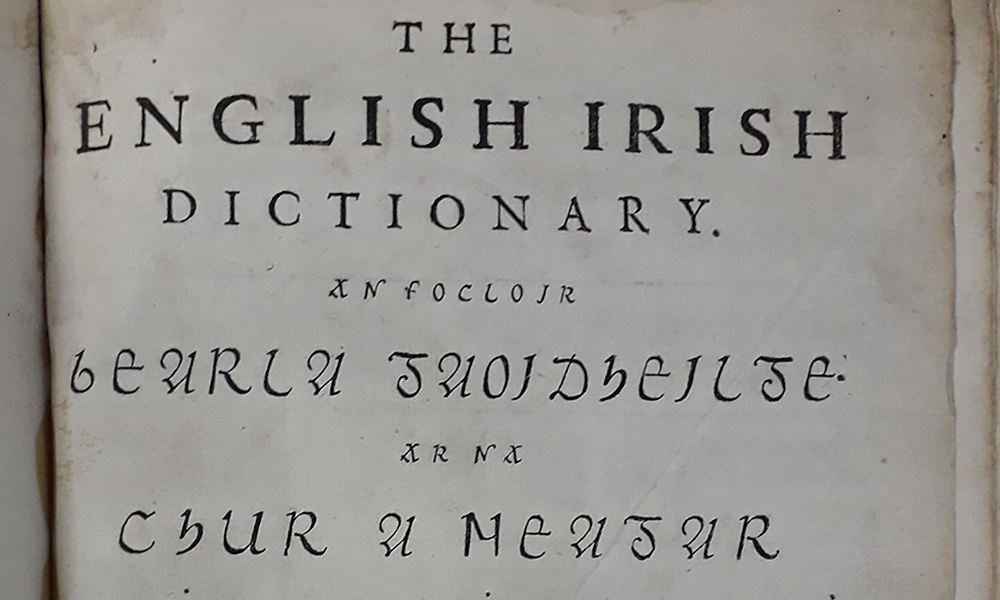 One of the earlier works held in the Dónal Ó Súilleabháin Collection is a copy of The English–Irish Dictionary, An Foclóir Béarla–Gaoidheilge, (Paris, 1732), edited by Conchobhar Ó Beaglaoich (Conor Begley) with assistance from Aodh Bhuide mac Cuirtín (Hugh McCurtin). The front matter of this substantial book of over 700 pages, includes a dedication and epigram written in Latin; a preface in English; a poem in Irish; and an approbation and royal permission in French. In addition, appended to the dictionary is an Irish grammar and introduction to the Irish language. This is the first book printed in France to contain an Irish Gaelic typeface. As the earliest English-Irish dictionary to appear in print, it is recognised as a pioneering work in the field of Irish lexicography. This blogpost attempts to outline briefly the social, political and cultural context of the publication this English-Irish dictionary.

The dictionary seems to have been designed for use primarily by the clergy and students attached to the Collège des Irlandais (the Roman Catholic Irish College in Paris). It was envisaged that most of the students would return to Ireland, where a dictionary and grammar such as this, would assist them in their pastoral work and also help to promote Irish language literacy amongst the largely Irish-speaking population. Of the student population, many were clerical students or ordained priests receiving higher level education; others were students of medicine or law attending classes at the University of Paris.

The Collège des Irlandais expanded rapidly during this period, mainly due to the very limited educational opportunities available to Catholics in eighteenth-century ‘Penal Law Ireland’. At the time of the dictionary’s publication in 1732, in addition to the Irish academics and students attached to the University of Paris, the sizeable Irish community in the city also included Irish officers and soldiers in the Irish regiments in the French army (‘the wild geese’); priests; physicians and merchants. The Collège des Irlandais, (then based in a building known as the Collège des Lombards, on rue des Carmes), was central to this community. Some of the Irish émigrés provided much needed financial support in the form of bursaries and foundations. 1

Dedication to the Abbé de Vaubrun

The dictionary’s preliminary pages include a dedication in Latin signed by Begley, addressed to the Abbé de Vaubrun (Nicholas-Guillaume de Bautru), a noted patron of the Collège des Irlandais. In the 1730s, the Abbé de Vaubrun provided financial support for building expansion work on Collège des Lombards, and for the construction of a chapel designed by noted architect Pierre Boscry and completed in 1738. In 1926, the Irish College sold the Collège des Lombards to the city of Paris and most of the buildings were demolished to facilitate road-widening. However the chapel was preserved, and since 1926 it has served the Syriac Catholic community in Paris, who re-named it in honour of St Éphrem-le-Syriaque. In 1769, the Irish College purchased an additional property at rue du Cheval Vert (renamed rue des Irlandais in 1807), and built a new college premises which today functions as an Irish cultural centre: Centre Culturel Irlandais. 2

The front matter also contains a Latin epigram by Trant, D.M, written from the perspective of an émigré. In it he celebrates the rejuvenation of the Irish language: ‘Inde solum invasit nostrum lingua altera, tumque dedidicit solitis nostra sonare modis, per te Hibernorum Juvenescit Lingua’ noting that his fellow Irish abroad are forgetting how express themselves as they used to, in their own language. Patrick Trant (d. 1736) was an Irish-born physician of the Paris faculty, a botany expert, and member of the Academie Royale des Sciences. 3 He is best known for providing the accompanying French translation to the Latin poem Connubia florum, (the marriage of the flowers) by Irish physician Dermot Mac Enroe, published in Paris in 1728. Described by Richard Hayes (1882–1958), as ‘a notable. figure in the French capital in the earlier half of the eighteenth century’, Mac Enroe, a native of Co Clare sometimes signed his Latin poetry ‘Demetrius de la Croix, doctor medicos’. 4

Following this brief overview of the Paris community from which the English-Irish Dictionary emerged, (including an interesting Co Clare connection), a later blogpost will look at the aspirations of the authors as they set about printing an English-Irish dictionary in the early 1730s, and the decision to produce a new Gaelic typeface now known as ‘Paris Irish’. 5