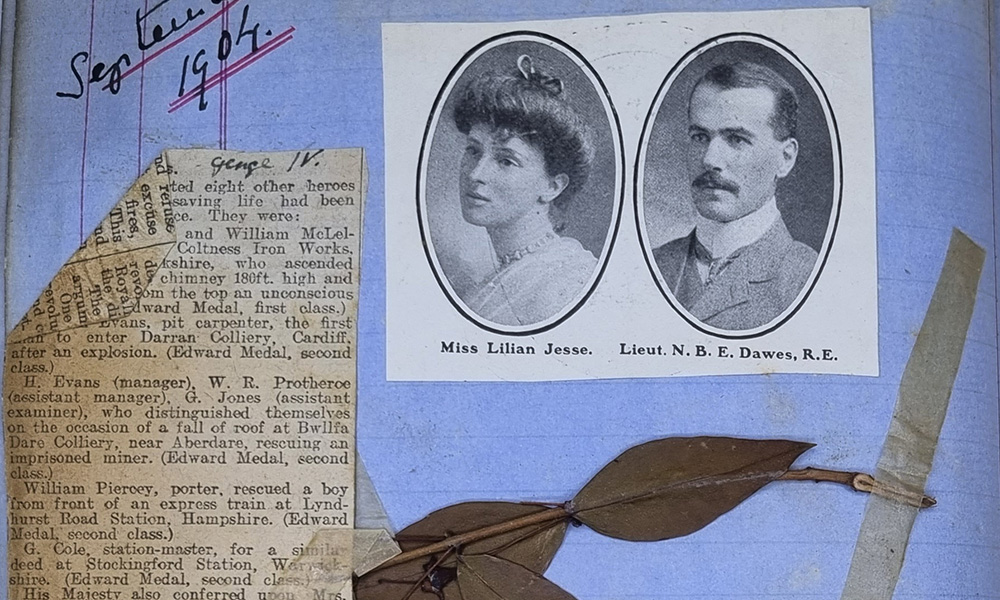 A large family scrapbook (P49/372) contained in the O’Carrol papers is the subject of this post. It was created by Sybil Scott, of Lissenhall, near Nenagh, Co. Tipperary, and later Hampshire, UK. The Scotts were related to the Carrols through the marriage of Sybil’s brother Philip Clement Scott to Florence Kate Carrol in 1896. They were also related to the du Maurier and Martyn literary families.

The scrapbook is a large, burgundy-coloured book containing 284 pages, on which are pasted photographs, postcards, amateur theatrical programmes, and newspaper clippings overflowing the edges of the original blue pages. The contents inside are well kept but are slightly discoloured, and the spine looks to be fragile, showing its age. All the material inside the scrapbook dates from the years 1895 to 1944, documenting an extended family history.

The book was passed through generations of the Scott and O’Carrol families, making the item a sentimental one. The pages are covered in newspaper clippings, photographs and notes written by hand from Sybil over several years and from the neat placement of them in each page, it was clearly a pastime that meant a great deal to her.

The opening page of the scrapbook contains a photograph of Sybil’s father, Clement Scott, a famous theatre critic for the Daily Telegraph among other publications. On each page there are newspaper clippings of his many achievements which are marked with ‘Papa’ in pen. However, his achievements included in the scrapbook are somewhat overshadowed by the many newspaper clippings announcing his death.

Furthermore, the scrapbook also includes clippings on many more topics associated with Sybil’s life including her connection to the Du Maurier family. George Du Maurier was Sybil’s uncle, a famous illustrator 1),  and she includes many drawings and photographs of him with her notes written in black ink and his many rough sketches.

Information about George’s son, the actor and manager Gerald Du Maurier, is also mentioned along with his wife Muriel Beaumont who is shown photographed with their daughters. The photographs include a striking image of Muriel, a stage actress, with her three daughters: Angela, Jeanne, and Daphne. One image is cut into the shape of a heart alongside which Sybil writes ‘Muriel and Angela Du Maurier’. What makes this entry into the scrapbook so fascinating is the name of the bestselling author and playwright, Daphne Du Maurier, one of the most famous names in English literature.

By the time this part of the scrapbook contents is revealed, it is astounding to see the connections Sybil and her family had to some of the most famous names from the past and a glimpse into their lives as they grew up together at the many properties the families owned. A very significant newspaper clipping included in the right corner of one of the pages reveals a message from King George V offering condolences on the death of Daphne’s father. Daphne’s work is also highlighted as Sybil kept account of her publications, including the novels Rebecca, Frenchman’s Creek, My Cousin Rachel, and Jamaica Inn, and the short stories, The Birds and Don’t Look Now/Not After Midnight.

Newspaper clipping and photographs of Gerald Du Maurier from P49/372

Newspaper clippings and photographs of Muriel Du Maurier from P49/372

Photographs of the Du Mauriers from P49/372

The tragedy of Peter Pan

While much of the scrapbook radiates nostalgia and the happiness of a successful society family it does not evade sadness, death and tragedy. One tragic tranche of newspaper clippings documents the accidental death by drowning of Michael Llewellyn Davis in 1921; Sybil has identified Michael in a note at the top of one of the pages as the son of Sylvia Du Maurier, who was a relative of Sybil and first cousin of Daphne Du Maurier. 2 Michael and his brothers were supposedly the inspiration for the characters in Peter Pan, created by the Scottish novelist Sir James Barrie. Barrie became the boys’ guardian following the death of their parents.

The scrapbook also holds memorabilia from the many weddings people like Sybil and those in her literary, family, and social circles would have attended. Several invitations pasted in near the end of the book show them to be over the course of the one year. One example is that for Lillian Jesse and Lieutenant Nicholas Beruard Edwin Dawes, who Sybil simply named ‘Ted’ which took place on 8 September 1904. The details put into some of the notes added by Sybil show the beauty of reserving all this information; from the small addition of a flower from the wedding, the wedding invitation itself, the newspaper cuttings reporting who was there and what they wore, to the thank-you notes some couples sent after. While preserving, presenting and arranging personal and family history may have been a pastime for Sybil, the resulting archival document is a useful tool for historians to access her life and times.