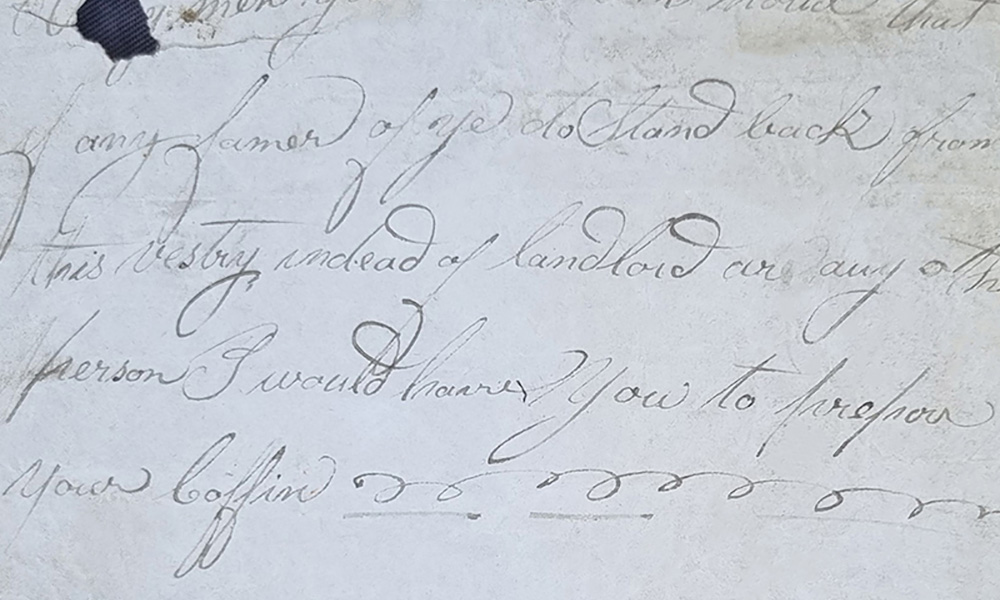 In pre-famine Ireland, rural disturbances were widespread varying from drunken fighting to wanton murder. Some of these were forms of protest by the rural poor in Ireland in response to the evictions or replacing of tenants, seizure of property or livestock or to the collection of tithes. Tithes were effectively taxes for the upkeep of the established or state church in Ireland, compulsory payments in cash or kind, regardless of religious denomination. They were a grievance and a burden on the majority Roman Catholic population, particularly in the context of the miserable conditions in which the poor existed.

Protests often took the form of intimidation through a number of means: house raids,  the killing of livestock, threatening notices and, at its extremity, murder. These protests occurred throughout Ireland during the late eighteenth and early nineteenth centuries, sometimes organised by secret societies called the Whiteboys or the Rockites. The area around Moyaliffe Castle, home of the Armstrong family, in County Tipperary was no exception.

A faded and tattered notice, found in the Armstrong Papers which warns the vestrymen of the area ‘to prepare your coffin’, reveals such protests occurred near Moyaliffe. The notice is written in ink on a weathered scrap of paper. The edges on the top and bottom and right-hand side are frayed, as though it was torn from a larger canvas.

A transcription is provided below:

Vestrymen, you are to take notice that if any farmer of ye do stand back from this vestry undead of landlord or any of them persons, I would have you to prepare your coffin. Let no man have the face of taking down this notice till all the farmers of the society will come to hear of this notice. 1

Though the notice is a clear threat to vestrymen, the phrasing is unclear. Often times members of the lower classes, cottiers, and labourers, were the perpetrators of such notices, so perfect literacy was common. Such notices would have been pinned on the doors of public places such as churches and chapel doors.

The vestrymen of Moyaliffe

Another document, found in the same collection (P6/772), is a ‘List of the names of members of the vestry’, dated 1827; those named were likely the targets of the anonymous threatening notice (P6/773). Vestrymen were prominent parishioners elected to take care of the concerns of the parish and so called because they often met in the vestry of the church. The list of Moyaliffe vestrymen survives in much better condition than the notice with the writing clearly legible and the page undamaged. Unsurprisingly, the vestrymen listed were predominantly landed proprietors and their agents.

Pre-Famine Ireland was a riotous place. Threats like this were constant as the rural poor tried desperately to protect their livelihoods by intimidating magistrates, tithe proctors and vestrymen from enacting laws and collecting tithes.

In 1826, the Freeman’s Journal reported that ‘a cow belonging to Rev. William Armstrong of Mealiffe [sic], was shot by some miscreant, who drove seventeen slugs into the animal’s head’ 2. Just three years later, the rector of Moyaliffe, Rev. John Going, was murdered as he returned home from sessions in Thurles where he sought the prosecution of his fellow parishioners for the non-payment of tithes 3. Though not a member of the vestry, Going would have been the beneficiary of tithes that burdened parishioners.

In the wake of Catholic Emancipation in 1829, increasing resistance to tithe collections is evident from the newspapers. According to the Kerry Evening Post, a notice similar to that found in the Armstrong Papers, was fixed to Moyaliffe chapel door, ‘threatening any person who would pay tithe composition to the Rev. Mr Lee’. Rev. William Lee, the new rector and Going’s replacement was ‘cautioned…by the Rockites that no strangers would be admitted into the parish’ 4. The following year, a letter from Rev. William Lee published in the newspapers, recounts a raid on his house by ‘a band of armed men’ 5. The next year again, Rev. Mr Lee was rumoured to have been murdered, the paper unable to confirm his death 6.

These accounts of rural disturbances, or ‘outrages’, as the newspapers and government officials termed them, paired with archival evidence such as the threat notice found in the Armstrong collection, provide useful case studies of agrarian unrest and the violence that embroiled pre-Famine Ireland. Between 1830 and 1836, the continued enforcement of tithes resulted in a campaign of civil disobedience, punctuated by sporadic violent episodes, known as the Tithe War. Tithes would continue to be a point of contention between the clergy and the laity in Ireland until they were abolished with the disestablishment of the Anglican Church in 1871.