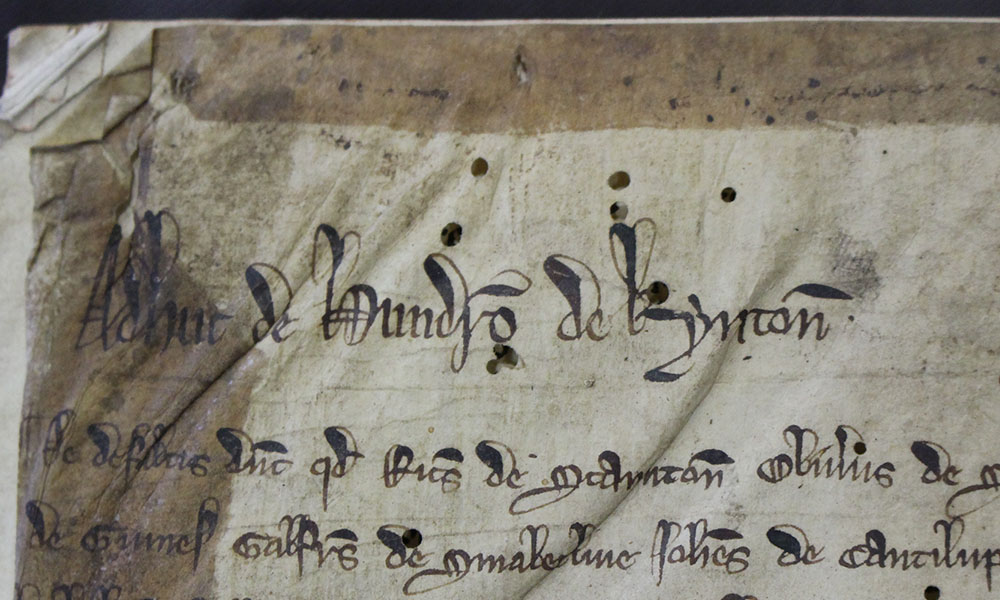 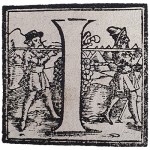 It is a rare thing indeed to find a modern rebinding in the Bolton Library – a topic which we shall delve into on another occasion – but today’s example from right here in Ireland, covering one of this cataloguer’s favourite items in the collection, the incunable1 Epistolae familiares (Nuremberg : Anton Koberger, 1486) of Pope Pius II (1405-1464), preserves some very exciting material indeed.

The binder’s ticket of Galwey at 22 Eustace St, Dublin appears inside the item’s front cover. Three men from the Galwey family operated as bookbinders at this location in the city in the late 19th century – John, Arthur Francis and his son Arthur Edward2 3 4 – and we have their seminal decision, or that of their clients the Church of Ireland, to thank for what we are able to explore today.

Two almost whole leaves of parchment manuscript5 waste appear inside the item’s front and rear covers. They are in very good condition, barring evidence of wormhole damage which may have bolstered the case for rebinding in the 19th century. Jean Miller, in her 1973 catalogue of the library at Cashel, devotes her record to this waste,6 mentioning the Koberger volume only in an aside, no doubt as aware of its importance as the Galweys in Dublin a century before. She tentatively dated the waste as being from c.1300.

Take a look at the image below. The first thing to stand out are the distinctively clubbed abbreviation bars and loops used, at first glance akin to ink splodges from a faulty pen7 – the aforementioned wormhole damage is certainly not helping here. This distinctive clubbing is a key feature of the documentary script in use in England in the second half of the 13th century – English cursive documentary script – with the forked ascenders and crossed tironian ‘et’ symbol typical of the script also in evidence.8 The latter remained uncrossed until the mid-13th century, and this will help us to date these fragments, as will dots/ slashes above the letter ‘i’ – see Membrane 1 Line 8 ‘in’ – an increasingly regular feature during that century,9 and the abundance of skeletal leading letters – see Membrane 1 Line 8 ‘R’ and ‘W’ in ‘Rob[er]ti de Westcot’.

Here in Bolton Library MS 4 we find cursive documentary script written in a very neat hand, with the incipit:

‘When I came into this profession this was the type of find I dreamed of!’

Had this waste been uncovered in the more recent past, following much autodidactic learning in scripts and palaeography, this cataloguer would have been better equipped to deal with such a find. As it was, in 2018, after an initial “Gosh, this looks old!”, it was clear that expertise would be needed to do this discovery any justice. The incipit’s reference to the Kineton Hundred – a hundred being a subdivision of a county/ shire – brought us to modern day Warwickshire and their County Record Office, and further to the University of Birmingham. What follows has been revealed by Amanda Williams, Mark Booth and Dr Jens Rohrkasten, and this cataloguer would like to sincerely acknowledge their warmth, erudition and enthusiasm in the endeavour. The above exclamation by Amanda upon first viewing images of MS 4 sums up perfectly how most of us who work with rare books and archives feel every single day!

Henry III (1207-1272) was the first king wholly bound by the Magna Carta,10 and his reign resulted in a quantity of administrative and legal documents, a boon for the researcher of medieval England. Bolton Library MS 4 is likely part of that output, and is a snapshot of the interactions of residents of the Kineton Hundred with Henry’s reign, residents who would might otherwise have remained unknown to us today. MS 4 is believed to be from an Eyre Roll, specifically the crown pleas section.

An eyre was a visitation of a county, made every few years, by a panel of royal justices empowered to hear and determine every type of action that could be heard in a royal court … all civil actions, all crimes … To do this, they had recourse to that all-purpose instrument of medieval English law, the jury.11

MS 4 deals with local crimes and accidental deaths, and the list of names at the beginning of Membrane 1 (see above) are probably those of the chosen jury. Among them are John de Cantilupe, whose family held the fee of Snitterfield in Warwickshire from Thomas de Clinton from 1242,12 John de Burgo of Magna Compton, Ralph Wylington of Gloucestershire, who held the manor of Cherington by service of a knight’s fee of the Earl of Warwick in 1268, and William de Stafford, whose family held land in the Burmington area from 1086 through to the 15th century.13

One of the cases in MS 4 sees Isabella, widow of Robert de Westcot, facing the men she accuses of his murder. Note the terms ‘morte’, ‘occis’, ‘in felonia [et] insult p[re]meditato’, ‘mortuus esset de plagis’ and ‘culpabiles’.

Paragraph 4 Line 2 (see Membrane 1) offers a date and a regnal year – ‘die s[anc]ti Barnabe anno XXXIIII‘ – a very welcome inclusion which, when combined with jury member detail, helps to date the incident as occurring during the reign of Henry III, specifically June 11th 1250.14 (The reign of Henry’s successor, Edward I, was also a lengthy one, but the documentation of any events occurring during his 34th regnal year (1305/ 1306) would, in the opinion of this cataloguer, almost certainly be too late for the palaeographical elements in evidence here).15

Membrane 4 contains a series of entries relating to accidental deaths, among which people killed in an accident with a cart – ‘occidit de quadam carecta … quandam furtam ferream … post inde obiit’ – and a boating tragedy – ‘occidit de quodam batello in aqua’.

‘A roll that was produced with some care’

The handwriting in your fragments is very neat, in fact better than in some other plea rolls and this indicates that your material was part of a roll that was produced with some care.

With regard to a possible source for MS 4, JUST1/953 (the session of 1260) and JUST1/955 (the session of 1272)16 could be candidates, both seemingly incomplete and lacking the crown pleas, but further research would be required.