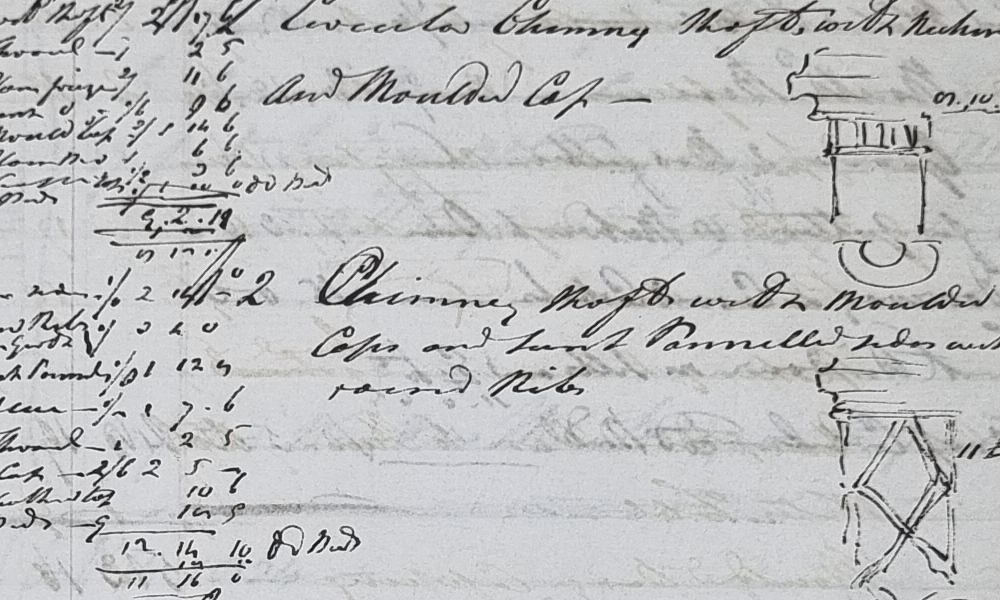 Adare Manor is one of County Limerick’s most recognisable landmarks, and one of the finest Irish examples of a Gothic revival country house. In 1832, the construction of the present-day Manor began at the behest of the 2nd Earl of Dunraven, Windham Henry Quin and his wife Lady Caroline, née Wyndham. This new house was to replace an older eighteenth-century one.

The Dunravens enlisted the Limerick-based James Pain to design a residence suitable for an Earl and his family. Pain is perhaps best known for his design of public buildings such as churches and court houses throughout Munster in the early nineteenth century.

James Pain was born in England and trained with John Nash, architect to the Prince Regent and designer of a number of Irish country houses. In partnership with his brother George for a number of years, Pain completed the designs and construction of many notable buildings in Limerick including the Villiers Alms Houses, Saint Michael’s Church in Pery Square, and the new Limerick Gaol. As architect to the Board of First Fruits for Munster from 1823, he was responsible for all the churches and glebe houses in the province.

His architectural experience and expertise were undoubtedly impressive. His Gothic proposals for Adare Manor, drawn up around 1828/9, were accepted by the Dunravens but work did not begin for a few years.

The Dunraven Papers, a very large collection of records dating from 1574, which are held at UL’s Special Collections and Archives, contain some very interesting ledgers pertaining to James Pain’s oversight of the first phase of construction from 1832—1834 (D3196/J/3A/2). These ledgers provide an account of the work carried out by various stonemasons working on the construction of the manor as well as other buildings serving the needs of the estate.

Pain’s ledger pertains to the stone cut decorations and ornamental features which were to be installed throughout the manor such as its battlements, lancet and bay windows, ornate chimney shafts, gothic arches, and octagonal decorative pillars. The ledger records the names of local stonecutters and masons who were employed to construct these features. The types of material to be used included grey and red limestone depending on the nature of Pain’s design and whether it was an internal or external feature. The ledger records, for example, that stone mason Dan Hourigan was employed to construct an entrance porch for the manor which was completed in April 1834 at a cost of £130.

Similarly, Pain records that Thomas Jackson was contracted to construct a mausoleum or burial place for the Dunraven family in May 1832 at a cost of £312. It is interesting to note that Pain meticulously wrote out by hand each months’ set of accounts before signing and dating them. Presumably this was to ensure that he had account and responsibility over what money was being spent, and that work was completed satisfactorily before payment was made. Recording the completion of work on the manor in this way gives researchers a good idea of the length of time it would have taken to complete work on specific features at the manor. For example, it is recorded that it took Thomas Jackson several months to complete the ninety feet of battlements required as external decoration in December 1832.

Perhaps the most curious aspect of this ledger are the small sketches which are included beside descriptions of the ongoing work. These sketches depict Pain’s designs for the various chimney shafts, ornate mouldings, pillars and archways which were to be erected around the manor. While these sketches are not to be relied upon as architectural scaled drawings, Pain presumably included them as visual aids to the technical descriptions of the construction work. These small details bear some incredibly valuable historical details, especially as they were drawn by the architect himself.

This ledger also reveals a huge amount about craftsmanship and architectural taste in the nineteenth century. The construction of the manor at Adare definitely provided employment for many local labourers, both skilled and unskilled. While Pain’s ledger only mentions the master masons who oversaw the construction of various aspects of the manor, there was most definitely a team of skilled masons working under them in order to complete the project. This highlights the importance of country houses and estates in providing employment for the people of the local towns and villages.

In terms of the architectural tastes of the Dunraven family as well as James Pain, the Gothic revival seemed to influence greatly. This is clear from the construction of cathedral-like lancet windows and imposing gothic arches throughout the manor, as referenced in this ledger.

While Pain began the initial design and construction of Adare manor in the 1830s, the Earl of Dunraven changed architects no less than three times over the course of the project. Among them was another famous builder church builder, the English architect Augustus W. N. Pugin.