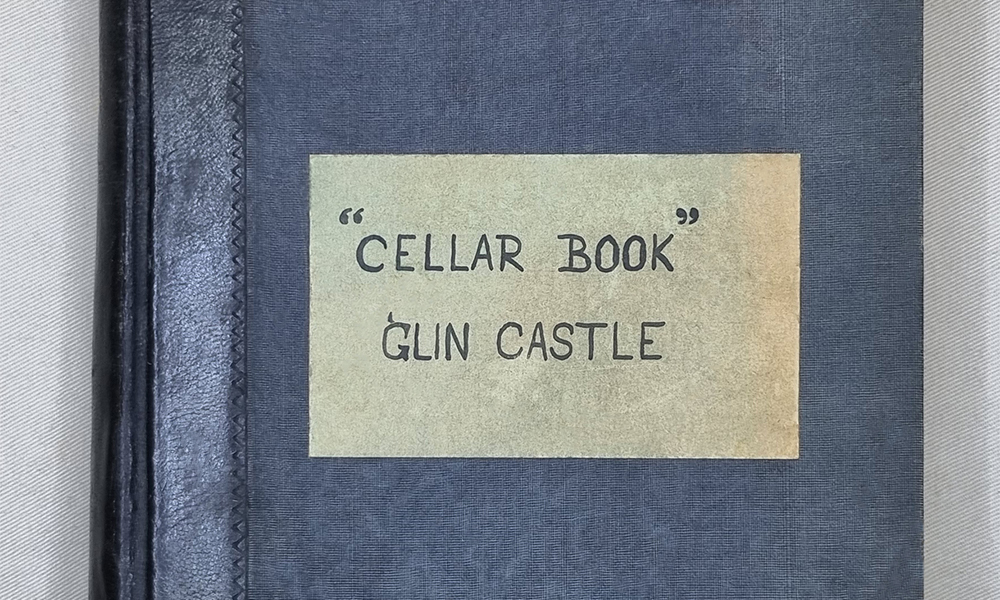 The Glin Castle Cellar Book is an inventory of the bottles of alcohols stored and consumed in the castle during the 1930s and 1940s. Named after the place of storage, the Cellar Book offers an insight into the types, brands, and methods in which alcohol was organised. This is useful for understanding the culture, society, and grandeur of life at Glin Castle when it was owned by Desmond Wyndham Otto Fitzgerald, 28th Knight of Glin (1901-1949).

Bottles in, bottles out

The Glin Castle Cellar Book is large and thick – measuring 23cm in length and 19cm in width – is navy in colour and hardbound. There is a dark navy leather strip enwrapping the casing and spine. The spine of the book has the word ‘daybook’ in printed in gold on it. This indicates that it is a book of original entry in which transactions were recorded manually by date, as they occurred. With the pages lined for accounting, the book is practical, allowing for the handwriting which is neat and legible, to be more easily read.

The Cellar Book accounts for an abundance of alcohol, the consumption of which would have been a key aspect of the many social events that were held in Glin Castle. The book is divided into different types of alcohol, indicated by tabs for easy access. These are ‘Port’, ‘Champagne’, ‘Sherry’, ‘Claret’, ‘Brandy’, ‘Whisky’, ‘Other Wines’ & ‘Liqueurs’. The book also shows how many of each bottle was brought ‘in’ and how many were brought ‘out’. December was a key date for alcohol, presumably in advance of Christmas time at Glin Castle. Visitors may have been staying over for an extended period during that time of the year.

In his twenties, the 28th Knight of Glin, was one of the ‘Bright Young Things’, a group of young fashionable people in London known for their ‘outrageous’ behaviour. In 1929, he married Veronica Villiers and the couple lived at Glin Castle, focusing on its restoration and the development of farmlands.

The Cellar Book also informs us of the various suppliers of alcohol and the dates that they supplied it, which reveal patterns of the social life at the Castle. In terms of whiskey both Irish and Scotch whiskey was available at the castle as it is noted that they were both supplied on December 4th, 1933. There are a vast array of suppliers in the book rather than simply one with examples such as John Morgan’s port and the Kildare St Club. From the book you can see the importance of calendar events. On October 23rd 1934, a seven-gallon cask of whiskey, ‘Domosdale milk’ was brought in, potentially for a large Halloween party.

Traditionally, the great Entrance Hall at Glin Castle was the main reception and entertainment room 1. The sherry and brandy that flowed at these parties was stored far from the party area and, when not in use, in the cellar typically down a backstairs of the kitchen. The layout of country houses like Glin Castle was to ensure that all preparation and service work was private and separate from ‘public’ spaces.