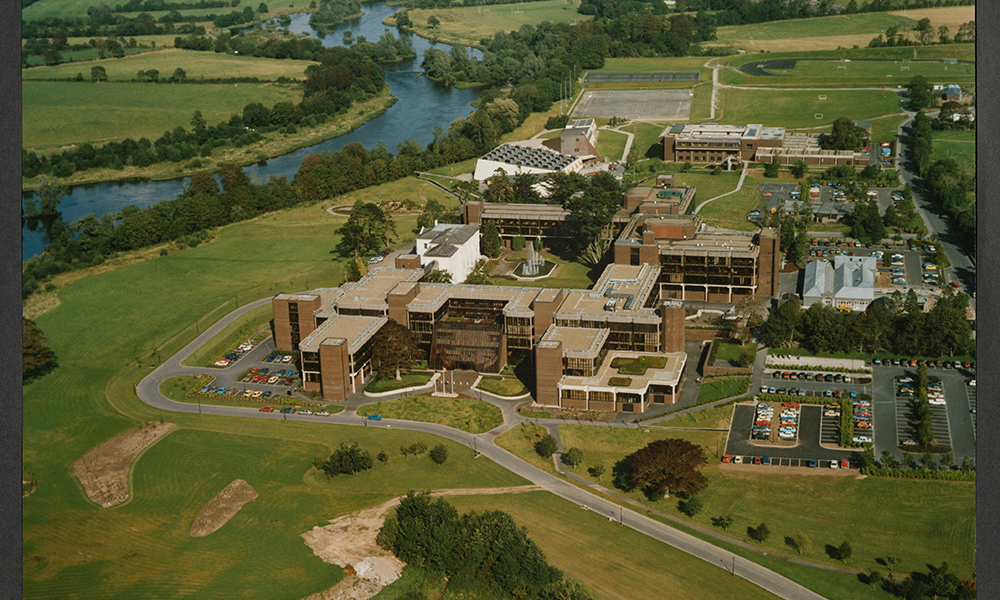 The archive also contains thousands of prints, negatives and slides taken over the years. As part of the celebration of UL50, the Special Collections and Archives Department at the Glucksman Library undertook to catalogue, or describe, the photographic element of the University Archives and digitise a representative sample of the collection, which will be hosted online on the UL Digital Library, due for launch later this year. Much of the collection had already been listed but needed to be renumbered, described in more detail and some of the collection needed to be rehoused in new folders and boxes.

Construction of the campus

These photographs clearly show the development of the campus, from 1972, with early classes being in Plassey House, to the sprawling campus that now exists.

It is particularly interesting to see the construction stages of well-known UL buildings such as the Main Building.

The presence of familiar faces such as Anne Sadlier throughout the archive is really lovely to see. You almost feel as though you are getting to know these people as they grow alongside the college. Anne Sadlier joined UL, then NIHE, in 1972 as Dr Ed Walsh’s secretary and member of the Planning Board, and is pictured below at her Honorary Conferring in 1995.

Exhibition – A University of Our Time

Zara initially examined our box list of material and then got in contact with the Special Collections and Archives Department with lists of archival material she was considering on using for the exhibition. We located and pulled this material from the archival strong rooms and got it ready for her to have a look at the material in person in our reading room. Over a number of visits, she selected what material would be used for exhibition.

The UL50 exhibition contains a significant photographic element. In some cases, some images had already been digitised and made available through the Glucksman Library Flickr account, or in various publications. Other times, images were sought relating to a particular event or person relevant to UL’s history. If these images had not already been digitised, or if they had not been digitised to a high enough quality for an exhibition, they were numbered and brought to the digitisation department. Here they were scanned as high-quality TIFF files which are safely stored online where they will be managed to ensure they remain accessible into the future.

The exhibition was launched on the 28 September 2022 in the Millstream Building. It is open to the public, and will run until 31 May 2023. The launch was attended by the founding President, Dr Ed Walsh, who donated additional archives relating to UL, including 28 years’ worth of his diaries, to the Special Collections and Archives Department.