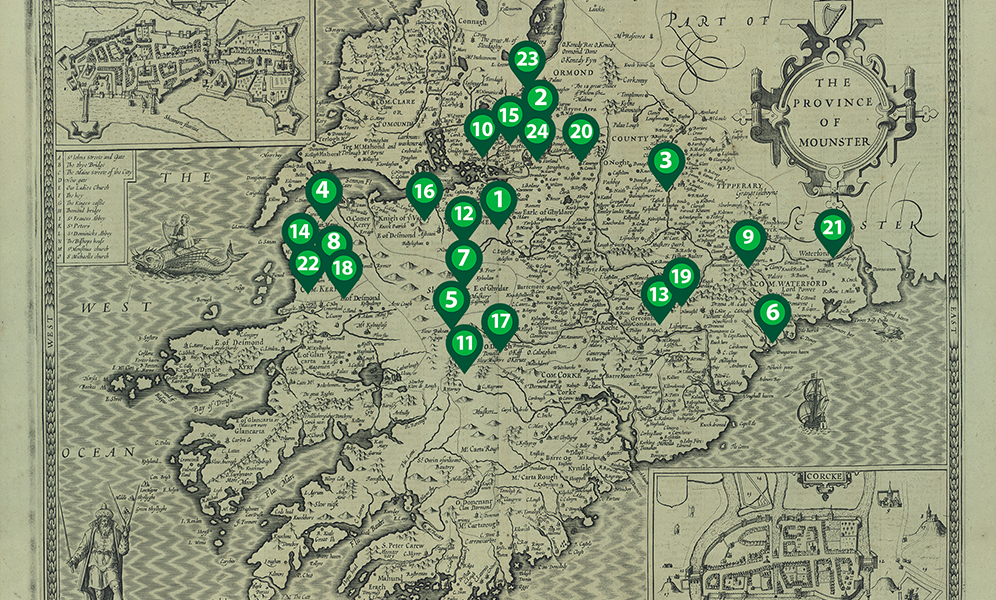 This year, the Special Collections and Archives Advent Calendar will focus on the theme of Place. Drawing on townland maps and images from our archival collections, the calendar will take you on a virtual tour of Munster and may be just the ticket for you to consider and reflect upon your local place in these days of staying local and fan sa chóngar.

The Irish Sense of Place

Attachment to place has been important to the Irish since time immemorial. The root of its written form can be found in a collection of circa twelfth century manuscripts known as the Dindsenchas (modern spelling Dinnseanchas or Dinnsheanchas) that comprises in all about 200 poems and 200 associated prose pieces.

The term dindsenchas is a compound word comprising two elements ‘dind’ which is derived from the Old Norse tindr, and while this may have related to ‘a spike or a point’, in early Irish it usually referred to a mountain, a hill or a hillock.’ This interpretation eventually stretched to include ‘a landmark, eminent or notable place.’

The second element is seanchas, which simply translated means ‘lore.’ However, Nuala Ní Dhomhnaill has remarked,  ‘it is in fact wide enough to encompass all the work of the professional learned classes of early Gaelic society including tribal lore, stories of conquest or migration, traditional laws and customs.’ 1. The lore of place in an Irish context is not concerned with material culture, building nor cultivation, rather its significance revolves around naming a place in order to mark one’s attachment to it. The very mention of native parish or place to the Irish seems to have a significant sociological affect, the very least of which can as John Montague puts it ‘net a world with its associations’ 2.

The significance of placenames therefore cannot be underestimated. PJ O’Connor who physically mapped the country in his Atlas of Irish Placenames suggests that “to know the townlands of Ireland is to know the country by heart.” 3.

Why not take this opportunity to take a closer look at some Munster townlands and who knows, maybe your very own place might just feature!