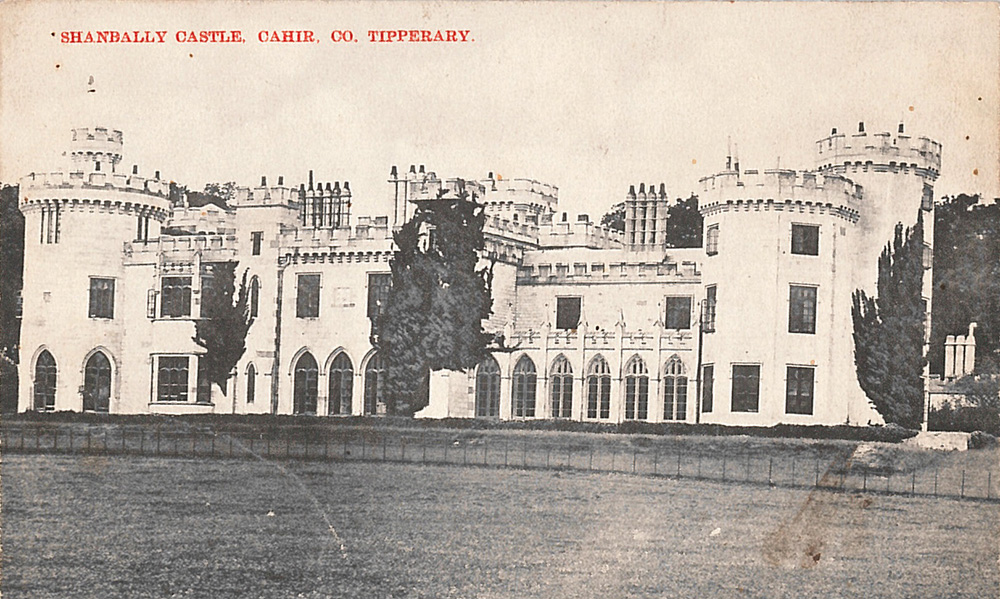 This week, we’re delighted to publish a guest blog post in conjunction with our colleagues at the Irish Archives Resource (IAR). The IAR is an online portal that links to archival collections throughout Ireland. For more, see iar.ie.

In March 1960, the Irish Land Commission completed the destruction, by controlled explosion, of Shanbally Castle, in Clogheen, South Western Tipperary – the largest of renowned architect John Nash’s Irish castles and once the country seat of the O’Callaghan family, Viscounts Lismore. Built for Cornelius O’Callaghan, 1st Viscount Lismore c1810 and passing to Lady Beatrice Pole-Carew and Lady Constance Butler on the death of the 2nd and last viscount, George O’Callaghan, in 1898, the impressive castle and its demesne was acquired by the Land Commission in the 1950s whereupon, having failed to find a buyer and despite trenchant local and national opposition, it was earmarked for destruction beginning in 1957. With it would be lost the vast collection of estate records housed there, which tracked the history of an estate which spread at one time over 42,000 acres, from Tipperary to Cork and Limerick, some blown up with the castle’s remnants and the rest consigned to a local waste paper factory.1

Rescue of the records

However in a remarkable act of rescue, local historian Timothy Looney of Cahir, Co. Tipperary, managed to salvage two trunks of manuscript material from these estate papers and in so doing preserve for posterity an invaluable glimpse into the history and workings of the estates and tenantry of one of the leading landowning families in Tipperary of the last two centuries. It is due to this admirable act of preservation that Timothy Looney’s papers, donated by his children to the Special Collections and Archives Department, Glucksman Library, University of Limerick in 2013, and recently catalogued and made available for research there, 2 contain this important material relating to Shanbally Castle and the O’Callaghan estates.

The Shanbally papers in the Looney Collection

Containing material of particular interest to genealogical, historical and cultural researchers, the papers (ref. P43/1–440), dating from 1715–1948, include a near complete set of rentals from the early eighteenth to the late nineteenth century, a number of eighteenth and nineteenth century account books, extensive estate correspondence from the early nineteenth to the mid twentieth century, and a range of townland map surveys from 1715 to 1898 primarily for counties Cork and Tipperary. Clogheen Fever Hospital records (145–148) are also worth noting, as is the unusually large set of correspondence between Viscount Lismore’s tenants in counties Cork and Tipperary and his agent William Rochfort from the turn of the twentieth century (209–378).

The development of the estate and lands around Shanbally

One major insight that the records provide can be found in the clues to landscape development and patterns of settlement that occurred during the landlord era from the early 18th century onwards. Centring on the modern parish of Clogheen and Burncourt (old civil parish of Shanrahan) the estate records relating to Tipperary, such as rent rolls, surveys and tenants ledgers, are rich in detail as to the growth of Clogheen village, the character of farm holdings, road and bridge building, and fluctuating rents during cycles of economic boom and downturn.

The nature of estate administration during the period is made clear in account books and correspondence – including the robust bureaucracy that supported the estate, with workers as diverse as nurserymen, foresters, master builders, land surveyors and huntsmen amongst the many employed by the O’Callaghan’s, whose growing wealth allowed the construction of the new castle and demesne (replacing the existing 18th century mansion) beginning in 1810, prior to the post war economic downturn of 1815. 3

Reaction to cultural and economic change by the ruling elites can also be seen in the copious correspondence found in the collection. 4 However, though the records provide ‘a view of the landscape from the windows of the Big House’, 5 they also give fascinating glimpses into the character and life of the tenants on the estates.

As is true of estate papers generally, the indexes of the various tenants ledgers and rent books in the collection, listing names and the associated townlands of tenants, are an incredibly useful resource for genealogists and family historians, however there are also additional insights to be gleaned for the researcher.

A key example is a tenants’ ledger kept by land agent William Rochfort (P43/79) between 1891 and 1902 which notes details about the tenants, such as their appearance, number of children, background, political leanings, illnesses and hardships, perhaps giving a greater sense of the varied life of the rural community than may be expected. Rochfort’s significant body of correspondence with tenants and ‘rent warners’ too provides an understanding as to the varying fortunes and deprivations suffered by the O’Callaghan’s tenants.

A plea from Nora O’Sullivan, aged 17

One of these letters (P43/287(18)), written by 17 year old Nora O’Sullivan of Shronebeha, Banteer, Co. Cork, is particularly poignant. With a house in desperate want of repair in order to withstand another winter, the O’Sullivan family needed to avail of a loan from the Board of Works in order to fund the repairs, yet this required them to be up to date with their rent. Due to the death of her mother, and other hardships, their rent was in arrears and Nora’s father had given up hope of achieving a solution. In a courageous move, with five smaller siblings to care for, she wrote herself to William Rochfort to seek a waiver that would allow the family to apply for a loan.

In this instance the land agent, seemingly touched by the letter, not only came to an arrangement re the rent but guided the O’Sullivans on how to go about their application to the Board.6 Such a record gives dimension and depth of understanding as to the complexity of the tenant/agent/landlord relationship and how it impacted the day to day life of those ordinary people often absent from the historical record.

During its later years Shanbally Castle, as a prominent and well placed estate mansion, was drawn into another significant moment in the history of the modern state – the emergency of 1939–45 and the associated requisition of houses for the military that accompanied it. The papers paint a fascinating picture of the, often humorous, travails of the mansion, the demesne and its staff as it became a base for the 10th Infantry Battalion of the Irish Army from September 1941 – including the shooting of a ewe and a bullock falling into a latrine pit – and the protracted, if good natured, wrangling that occurred between William Sutcliffe, land agent, and the Department of Defence.7 In tracing this period of wartime, the Shanbally papers represent an important research resource into a perhaps underexplored episode of Irish history.

The Shanbally Castle material in the Timothy Looney Papers constitute an invaluable insight into the life and development of the landscape and rural community of the lands which formed the O’Callaghan estates in Tipperary, Cork and Limerick during the early 18th to mid-20th century. The ongoing existence of these, and their potential to inform us of their historical moment, we owe to Timothy Looney’s crucial act of salvage in 1960.

‘… through these words comes opinions into the world’

The Index librorum prohibitorum and the banning of books

Yasha is a natural yellow-brown dye extracted from cones of the Japanese alder tree and used to dye fabric and paper.

National Heritage Week 2022: The Bolton Library A to Z