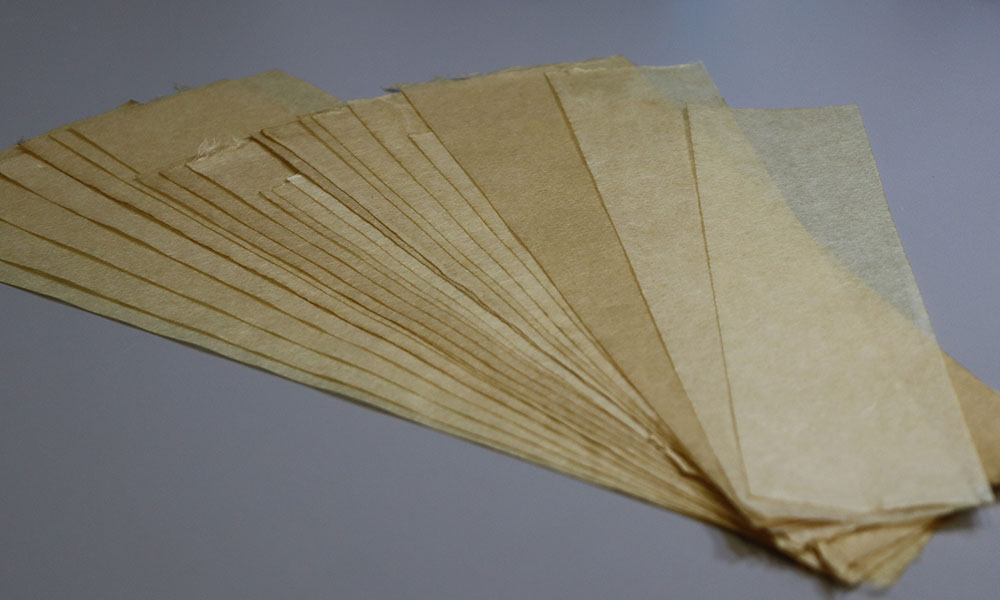 Yasha is a natural yellow-brown dye extracted from cones of the Japanese alder tree (Alnus japonica) and used to dye fabric and paper. It is a traditional dye still used in Japanese mounting studios to dye lining paper for hand scrolls and hanging scrolls 1. Like many other Japanese and Chinese materials and tools, it has become adopted into Western conservation practice. It is suitable for conservation as the dye is light fast and PH neutral. 2

Yasha brushes on paper dyes very evenly, which makes it suitable for batch dyeing, as it is easy to produce uniformly coloured sheets of paper. Yet the subtle nuances which can be obtained from the dyeing method are sufficient that using tissue dyed with yasha provides an effective option to colour match papers individually. The papers can also be layered to achieve a variety of different shades. The dye is light and liquid enough to penetrate the paper fibers, which means that the paper edges can be torn or feathered, a big advantage over tissue dyed with acrylic 3. For these reasons, papers dyed with yasha can be used to make pre-coated, or re-moistenable, tissue for repairs. 4

In a paper and book conservation studio there is an almost endless demand for coloured tissue, and the light colour obtained from the dye softens the white tone of the repair paper making it suitable even for plain or “white” paper. Due to this, paper dyed with yasha is a very good staple material for a conservation studio. The process is relatively straightforward and quick, and requires little specialist equipment, apart from a PH meter to test the fixing solution.

Conservator Julia Poirier at the Chester Beatty was kind enough to provide some Japanese alder cones. Although yasha is derived from Japanese alder, black alder (alnus glutinosa) which is indigenous to Europe, can also be used to make a similar dye. I collected my own alder cones from the black alder last November in Killaloe, Co Clare and dried the cones for three months before using them for dye. I followed the method for dyeing with yasha as outlined by Julia in Yasha: A Traditional Japanese Paper Dyeing Technique, which is an excellent introduction to yasha and has a very clear step by step description of how to use the dye.

The cones were placed in a saucepan, covered in water and simmered for two hours until the colour was deep brown. After the liquid had cooled it was strained through a cheese cloth to remove any debris. The cones were retained, as they can be used for additional batches of dye5.I applied they dye by brushing it directly on to the paper, with a large soft brush. Each sheet was dyed individually, brushed on with even strokes until the sheet was completely covered, and the next sheet was stacked on top, staggered by five millimeters and the process repeated. Using this method creates shades of different intensity, with the darkest coloured paper at the bottom of the stack, and lighter at the top. 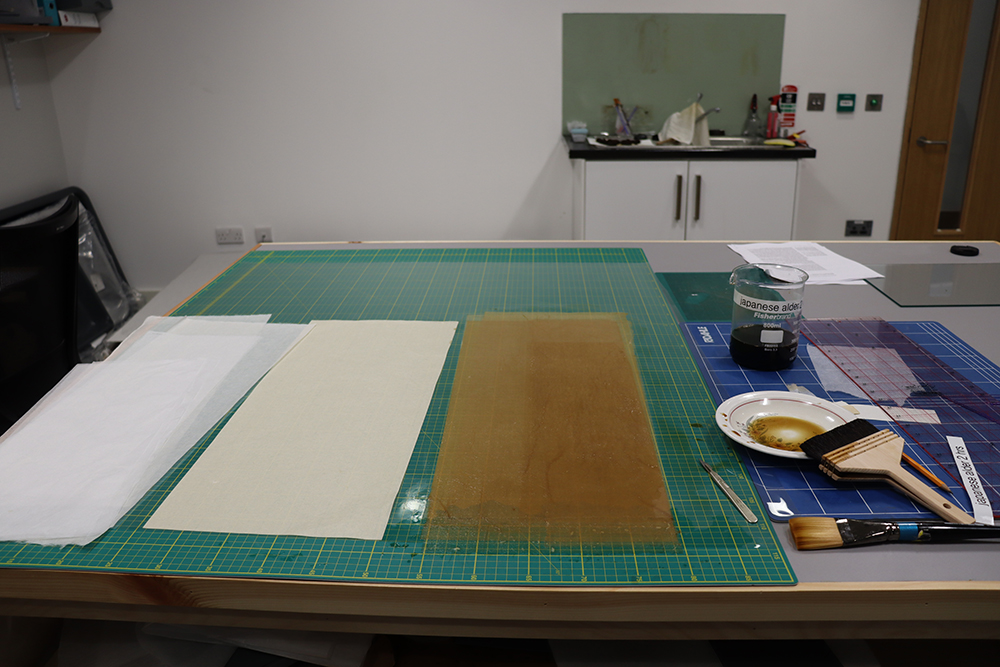 After the colour was applied, the paper was left to air dry on felt, before the sheets were separated and moved to dry in between blotters. Before it is ready to use the dye needs to be fixed. Introducing alkalinity makes the dye slightly darker, bringing out the brown tone, and causing it to “bite” better to the paper. Fixing was done by washing out the excess dye in a quick water bath, and then submerging the paper in Potassium hydroxide (lye) solution of PH 7.1. Lye is caustic and dangerous to skin and eyes, so it is important to wear appropriate PPE, such as gloves and goggles. After drying, the paper was given a final bath to wash out excess lye and dried between blotters.

Having been boiled for the same amount of time the Japanese and black alder cones produced fairly similar results, however the Japanese alder cones released colour as soon as they were covered with water, and had from the start a very dark brown colour. The black alder cones did not release colour until they had simmered for about 20 min. Comparing the finished result the yasha was a darker brown, the European paler and more yellow in tone. It is possible that a deeper colour might be achieved with longer boiling time or repeated applications. If there was any difficulty in procuring Japanese alder cones, European alder cones can suffice as a replacement.

Due to the sensitivity of paper fibers when wet it can be very difficult to dye very thin papers, but this method works very well for this purpose. I used sheets of machine made RK-1 tissue with a gsm of 0.9, which was very easy to dye with the brush. I found the method simple and straightforward to follow. The most difficult part was controlling the paper during repeated rinses, but this was easily solved by using smaller pieces of paper or supporting the paper on bondina.

The conservation of the map of the world by Matteo Ricci, Journey between East and West, Uta Landwher, Christa Shuster, Elizabeth Zeilinger, ICOM-CC 2011, preprint of the 16th triennial conference