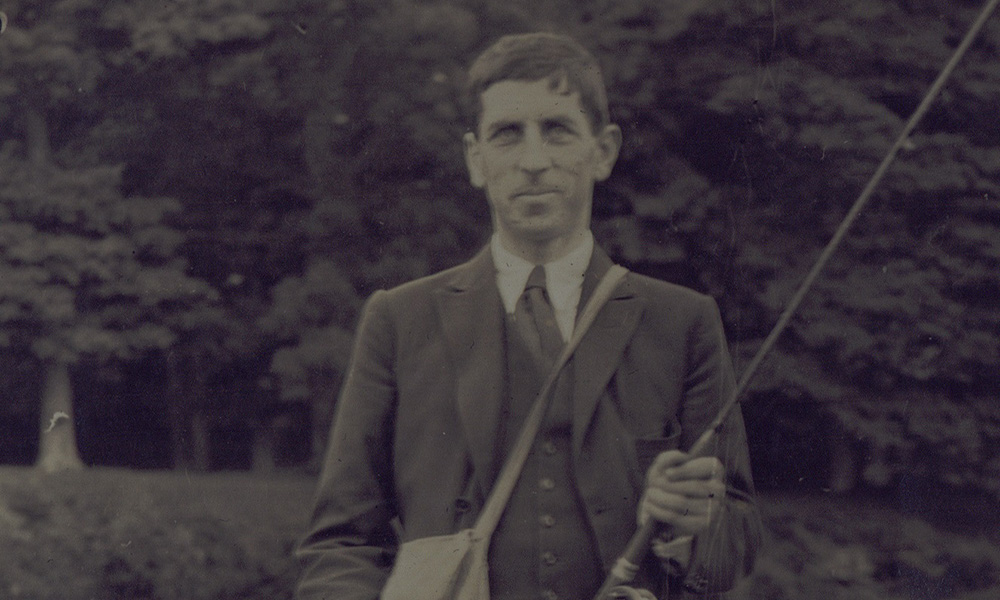 ‘Good things come to those who bait’ is a motto that could easily have been coined by Stephen O’Mara (1884–1959), director of O’Mara’s Bacon Company and three-time Mayor of Limerick. Not a holiday went by that he was not found trying his luck at catching trout in some corner of the country, or even as far afield as Spain. Stephen’s abiding passion for fly fishing also found expression in The Fishing Gazette, the de facto publication on angling, fishing, and fish culture, to which he contributed humorous articles in the 1920s under the pseudonym ‘Essem’.

In his comic sketches, Stephen portrays himself as an innocent enthusiast, the type who catches the fly in his coat, tangles his cast, trips over his net, and ships water above the waist to feel it trickle icily down to his toes but who never loses enthusiasm for the sport or his dream of a haul of miraculous proportions. In reality, if family photographs are anything to go by, Stephen was an experienced angler who knew all the tricks of the trade.

Illustration of salmon flies from The Book of the Salmon, by Edward Fitzgibbon (1850), Leonard DS/213

In his essays, Stephen describes the melancholy idleness that fills the weeks and months between the end of the fishing season and the start of a new one. To pass the time, he sends away for catalogues and contemplates the virtues of commercial flies, agonizing over the choice between the exact colour imitations of Halford versus the translucent body of Dunne. He re-reads his books on fishing, examines his tackle, greases his line, and polishes his rod. ‘These things, alas’, Stephen notes ruefully, ‘provide about the same inspiration as a perusal of last year’s love letters to last year’s girl.’ In his desperation, he even resorts to a few muddy rounds of golf, but ‘Let us not dwell on it unduly’.

The moment the fishing season commenced in early spring, Stephen was off the blocks. Fishing trips, especially in the summer months, could last for weeks. In 1928, two months was spent on board the houseboat Mayfly on the majestic Lough Derg spanning between the counties of Clare, Tipperary, and Galway. Other perennial favourites included Coomasaharn Lake, ‘a bowl in the mountain’ in County Kerry, and the Gowla Fishery in Connemara, the fishing rights of which were held by Stephen’s brother, James O’Mara.

The fishing bug affected the entire family, including Stephen’s wife Anne ‘Nance’ née O’Brien and their son Peter, who made his father proud by catching his first fish at the age of six! There was nothing Stephen appreciated more than the smoke curling from his camp fire and a friend to share it.

When it came to his favourite fish to bait, there was no question of Stephen’s preference for trout. ‘Any fool can catch salmon’, was his bold opinion, ‘salmon are sour, sulky, bad-tempered beasts, while trout are cheerful, wise, open-handed playboys.’ He goes on:

Salmon are strange and savage; trout are friendly and civilized; salmon can be aggravated to their own destruction; trout allow themselves to be coaxed to your delectation… Look at the way a salmon takes the lure-fly or bait. No graceful curvetting, no fancy steps, no delicate lip action, but a blind, wrathful passionate gulp. Violence is the very keynote. Consider the conduct of this “monarch of the river” when he realizes that he is definitely hooked. Does he act according to any recognized code of gentlemanly behaviour?… Not he!… like a sulky submarine he stubbornly takes you round the sharpest rock he can find, and with one jerk cuts the delicate trace, robbing you with violence of your rightful sport, your expensive lure and your even and gentle temper.

However, a gallant fisherman will take such disappointments in his stride. In the midst of his chagrin there is a spark of gladness that the fish who fought so gallantly for his life has won it. After all, there is always next year and the chance to return and conquer, another balmy July evening to look forward to, spent ‘waist-deep, behind seven or eight large fish, all voraciously on the feed and all within my easy cast’. It is of such dreams that a fisherman’s hopes are made. 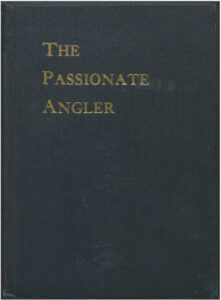 In December 1927, Stephen came up with the idea of turning his ‘Essem’ articles into a privately published book. His sister-in-law, the author Kate O’Brien then living in London oversaw the project and was sworn to secrecy. On 5 February 1928, Stephen placed a bound copy of The Passionate Angler in the hands of his wife Nance to mark their tenth wedding anniversary. What better way to please and amuse the catch of his life!

The full Stephen O’Mara archival catalogue is available online. The Book of the Salmon (1850) by Edward Fitzgibbon is available in the Leonard Collection, DS/213.