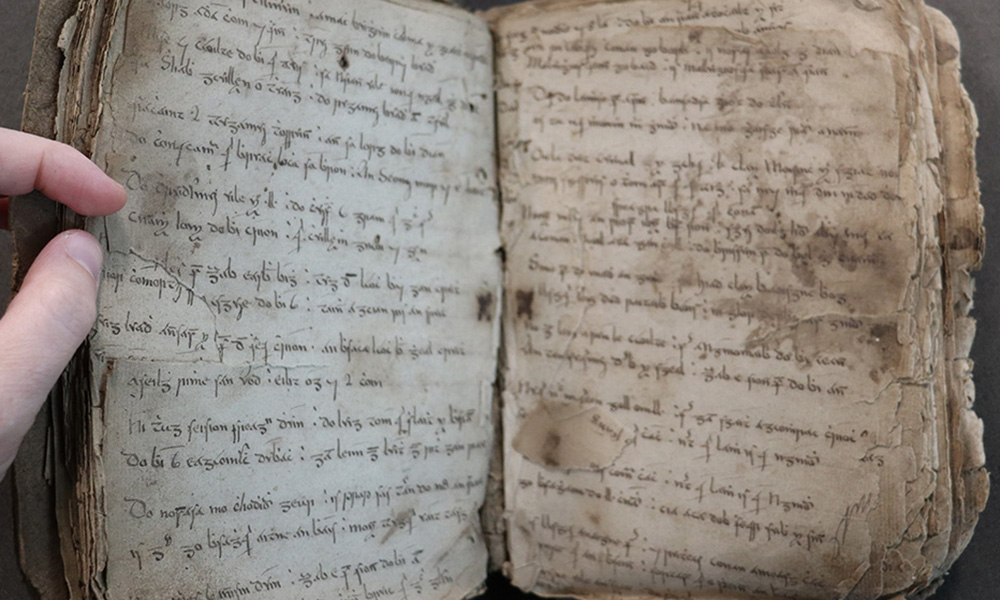 Following my previous post about the Special Collections and Archives’ tutorial in bookbinding as a part of the National Heritage week, this is a short introduction to the Irish Scholar’s binding itself. In this short post I will briefly outline the history and context of this type of binding.


What is a “Scholar’s binding”?

To put it very simply a “Scholar’s binding” is a homemade book with writing in it. It is a term used in the study of rare books to mean an informal binding not made by a professional bookbinder, and most often that would be the same person who used it.

The Irish manuscript tradition was not greatly affected by arrival of print at the end of 15th century. Since printing, both the Irish language and in Ireland, was very rare before the late nineteenth century, much of the literature and history of Ireland was preserved and disseminated in manuscript form only. 1 There were many contributing reasons for this but important factors was the lack of an early domestic print and papermaking industry, combined with the high import cost of paper and printed books. The incentive of mass production in combination with the relative cheapness of printed books that made them so successful on the mainland didn’t quite hold true in Ireland and this meant that manuscript form continued to be the main vessel of Irish language and script. The earliest books printed in Irish were printed on the continent.

Scholar’s bindings were made in Ireland from the end of the monastic period up to the 19th century, with some overlap on both sides. Of course, at a later stage, Ireland did have a flourishing print industry, but it was not properly established until the late 17th century, after which Scholars binding carried less significance but continued to be made. While the first Irish printing press was established in 1550 it only ever produced one whole book, printing broadsheets and pamphlets instead. The first Irish paper mill were founded in 1690 at the river Dodder in Dublin.

The areas of study for the scholar’s bindings range from literature, genealogy, hagiography, spirituality, law, medicine and dinnscanchas (place lore) and were both copies of existing works and individual studies. However, our focus is away from the contents to the structure and the social information in the books as objects.

The Scholars binding as objects

The 2012 survey of Gaelic Manuscripts at the National Library Ireland found that, although there is a great disparity between the individual items, there are a few elements that characterizes a Scholar’s binding: 2

What does that mean?

In general books which comes through a print shop and a bookbindery are going to be made according to a similar method. Whereas the methods might vary infinitely, from binder to binder and type of binding, there were more or less a standard and a set of accepted methods.

By contrast Scholars’s bindings were put together with the materials and methods available. The persons who made them would not have had access to a bookbinding training, techniques or tools. The structures were made in many different and inventive ways and they have very individualistic, improvised looks.

This is not to say these bindings are badly made by unskilled hands. Instead they show that the way they were put together were informed by a wealth of methods from other crafts, showing the skills their makers came from a variety of sources.

Although the writing media in most cases tends to be paper the covering materials in the bindings tend to be readily available stuff, such as corduroy, saddlery leather, seal skin, commercial leaflets and covers recycled from other books. This makes the scholars binding interesting as a social artefact, the materials often having direct date and geographical connections through use of waste from advertisements, ephemera etc.

Scholar’s Bindings in the Bolton Library

MS 24, the above binding, is a very simple structure and consists of two gatherings, bound together without hard covers, with additional loose pages. The gatherings are made up from an irregular number of pages folded together in single fold sections. The warped spine conceals the sewing and at the time of writing, the means of attachment is unknown. It is likely however that the sections are side sewn together with vegetable fibre cord. It is unknown if the binding has ever had boards.

MS 23 is a more complicated structure utilising established bookbinding techniques. It is a tacketed manuscript binding with pasteboard covers and leather spine.

The binding has a thick leather strip covering the spine and additional strips lateral at the head and tail, attached through tackets. The boards are bare. The binding is sewn together with twine/cord. Internally there is an alum-tawed flange laced into the boards and attaching the binding and the boards. The pages are stab sewn and the thread is wound around the thread sewn vertically through the spine. This binding shows a clear connection to limp tacketed bindings, a well known for accountants and clerks to bind their books.

Both of these examples show the care and ingenuity present in the Irish Scholar’s bindings. The items have obviously seen a lot of use and by all evidence, they have been working documents. As a conservator working with these items it is important to approach them as archaeological artefacts where any repair or conservation has to take care do document and preserve to original structure as it can be considered as much historic evidence as the contents.