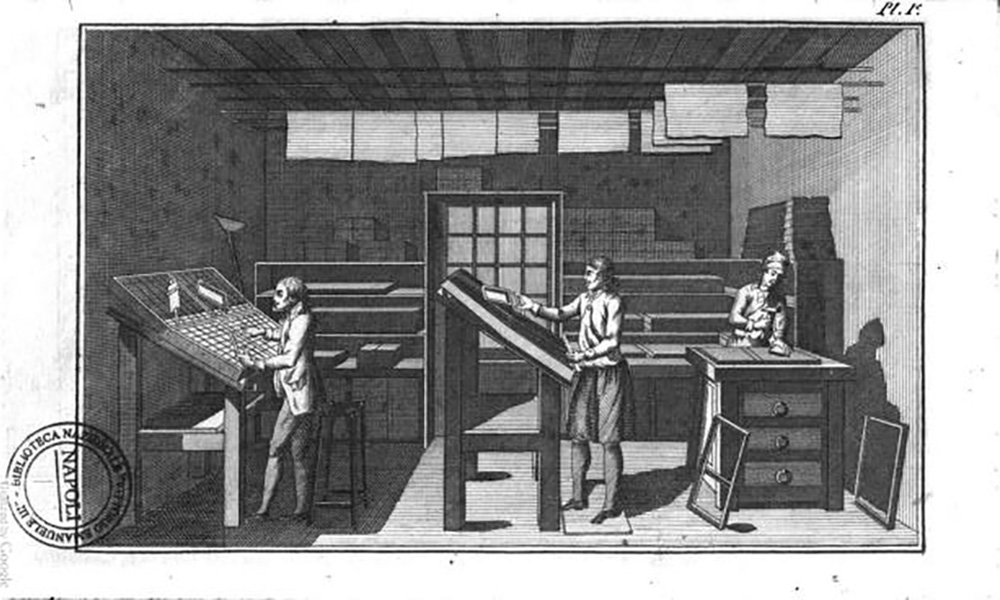 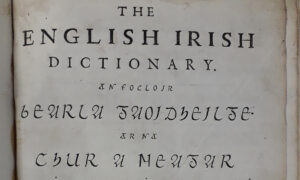 Following the recent blogpost here which described some of the interests and activities of members of Irish community in Paris in the early 18th century, part two briefly outlines the motivations of the authors of this dictionary, a venture which included the production of a new Gaelic typeface.

Very little firm biographical detail has been established yet regarding the editor of the dictionary, Conchobhar Ó Beaglaoich (Conor Begley), but scholars agree that he was almost certainly a Paris-based Irish priest with connections to the Irish College. 1 In the English language preface, Begley pays tribute to past scholars of the Irish language literary tradition, who ‘filled Ireland with an incredible number of excellent manuscripts upon all subjects’. He laments the loss and destruction of so many manuscripts due to war, but remarks that:

there are still several valuable pieces to be met with, not only in Dublin but even in Oxford and other places, some of which are mentioned by…Sir James Ware in his Account of the Writers of Ireland and Doctor Nickleson, …in his excellent Historical Library. The Irish gentry have therefore opportunities enough still left, for recovering and preserving their mother-language.

Offering his help to the Irish community in Paris, Begley continues:

In a bardic poem inserted before the main body of the dictionary, Aodh Buidhe Mac Cruitín praises the new clear Irish typeface: ‘Do dháil glanchlódh Gaoidheilge’. This angular Gaelic typeface known as Paris Irish was cast by the type-foundry of Loyson in Paris, who included it in specimen-books in 1751 and 1757. 2 The book was printed at the press of Jacque Guérin (1699—1752). 3 Begley’s preface also seems to indicate that he participated in the design of the new Irish language typeface or cló gaelach. He states that he:

familiarized the Irish characters to those of the English as much as I durst without departing from the form of them so that I hope the perusal of this book will afford no harsh or unpleasant amusement.

In contrast to Begley, the work of Aodh Buidhe Mac Cruitín, (Hugh MacCurtin), poet and scholar, is better known. He was born c.1680 in Kilmacrehy, on the west coast of Co. Clare, into a family of hereditary Gaelic scholars. A respected poet and scholar, he moved to Dublin sometime after 1713. In a poem written by Tadhg Ó Neachtain (c.1671-1749), which lists scholars active in Dublin at that time, he is described as ‘an crann os coill’, (the highest tree in the forest). 4 In 1717, his first book, A brief discourse in vindication of the antiquity of Ireland was printed by S. Powell at the Printing Press, Copper Alley, Dublin.

By 1728 MacCurtin was in Louvain where his second publication: The elements of the Irish language grammatically explained in English in 14 chapters, was printed that year by Martin van Overbeke. This grammar appears to be based on a much larger manuscript grammar written by a Franciscan priest, Fr Francis Walsh, (1654–1724), a text which MacCurtin summarised and edited. 5 In his preface to the dictionary, Begley acknowledges the need for an Irish grammar: ‘But still, as a dictionary in a language so little known,… would be imperfect …without a grammar to explain the orthography and syntax of it, I have added one, sufficient for that purpose’. The Irish grammar which is appended to Begley’s English—Irish dictionary (1732), is the text of MacCurtin’s 1728 Louvain grammar, reprinted with minor corrections. 6

The publication of this dictionary was an important event in the history of Irish language publishing at a time when the language lacked any official status or state support. As the lexiographer Tomás de Bhaldraithe remarked: ‘ba mhisniúíl éachtach an iarracht i tráth a raibh lucht léinn na Gaeilge in ísle bhrí’. 7 Further research into the circumstances surrounding the publication, sale and readership of books such as this dictionary, may provide valuable historical insight into the lives of individuals (such as Conor Begley and his milieu), and other members of Irish scholarly networks active in continental Europe at this time.

Can you help with the identification of this former owner?