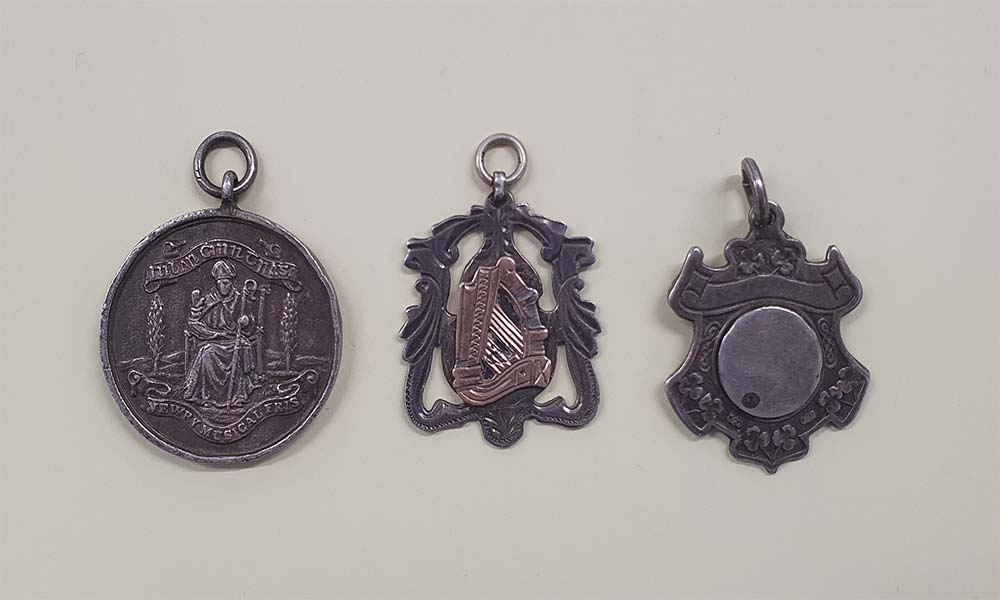 A digitised version of a reel-to-reel audio tape contains music to accompany such dances and digital access to this recording is available. The photograph content features Irish dancers (c.1950’s) in costume and there are a number of needlework magazines (c.1895 to 1974) which may be of interest to researchers in the area of Irish dance costume and the introduction of crochet and lace.

Publications such as The Raphaelite (1937) and Capuchin Annual (1942) and a letter dated July 1979 from Archbishop Tomás Ó Fiaich shine a light on Nan Quinn’s religious interests. The letter contains a handwritten postscript stating that the Archbishop is a past pupil of Nan’s dance school.

Nan Quinn’s involvement in Republican affairs in the early part of the 20th century is evident by a number of medals and certificates in the archive, including a certificate issued by Óglaigh na hÉireann [Irish Republican Army] Fourth Northern Division to Annie Quinn in recognition of her contribution to the fight for Irish freedom, a 1917-1921 Service Medal awarded by the Department of Defence to persons who were members of Cumann na mBan during the revolutionary period 1917-1921 and a Truce Commemoration Medal issued to veterans of the War of Independence in receipt of the 1917-1921 service medal.1 There are a number of souvenir booklets, programmes and press cuttings relating to political events and activities from 1916 to 1979.

The scale and outreach of Nan Quinn’s life’s work is reflected in the variety of leaflets, flyers, programmes, brochures, medals, trophies and certificates spanning a period from c.1928 to 1994. The correspondence provides intriguing glimpses of a woman who successfully bridged many different facets of Irish life. The Nan Quinn Collection tells a story of how the themes of Irish dance, music, politics, religion and family life crisscrossed in the life of a dancing teacher in twentieth century Northern Ireland. The Nan Quinn Collection catalogue is available on our website.