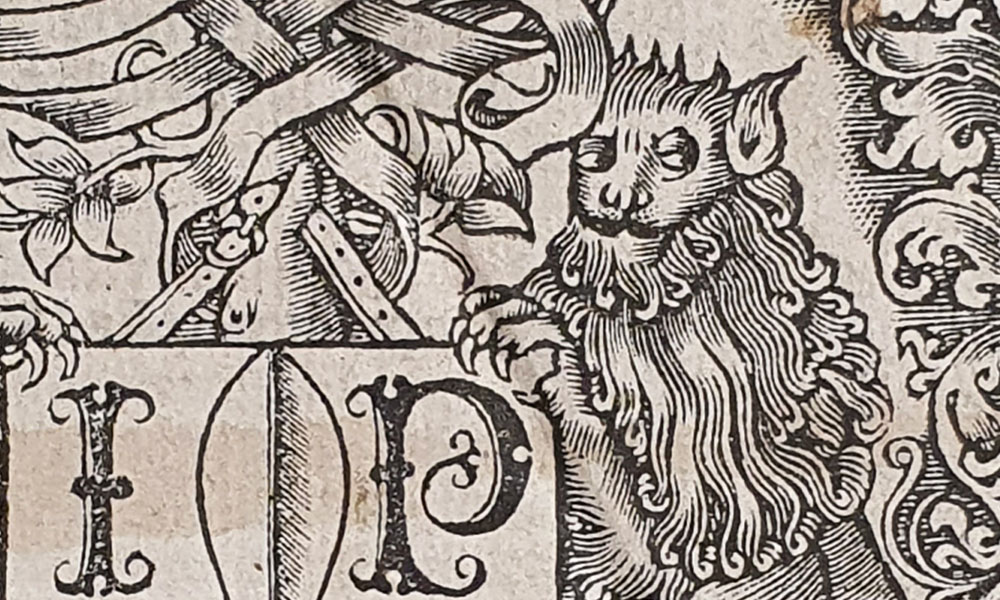 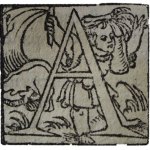 s a cataloguer, I know what I like, and I do like a good title page. Those produced by and for the Parisian publisher Jehan (Jean) Petit (active 1492–1530), one of the most successful names in early modern French publishing,1 are among my favourites, and we are blessed to have six (and counting…) of his creations and commissions gracing the shelves of the Bolton Library.

Take this incredible offering from his publishing house in 1515.

Sure, it is a bit scruffy, and its border betrays some slippage, but what a scene!

Produced in partnership with the Venetian printer Giovanni Bartolomeo Gabiano (active 1507–1531),2 and covering the scholastic treatise Expectatissime & suo merito laudatissime by Durandus of Saint-Pourçain (approximately 1275–1334), is an engraved architectural title page in red and black, which ultimately frames Petit’s own extravagant device,3 one of many employed by him throughout his career.4

The device depicts, on an arboreal background, two lions5 holding a shield bearing Petit’s initials IP, with his name printed in full at their feet. A fleur-de-lys appears at the centre of the shield, a pictorial representation of Petit’s address in Paris at the time, at the sign of the lily.

This is just one of a number of variations on Petit’s lion and lily device. Note the subtle differences in the example which appears five years later in Bolton Library C.4.17, merely a turn of the head, a better stylist, and an attitude:

The year after that, this variant appears in a Bible commentary by the venerable Bede, in which two rather plain lions face each other:

The existence of such variation is unsurprising as the use of metal or woodcut6 images, be it for the embellishment of text, title pages or bindings, subjected them to great wear and tear, and the cutting of a new copy in this handpress era could never hope to produce an exact replica of the original.

This two lions device contrasts to Petit’s earlier leopard and lion device,7 which can be seen in Bolton Library I.17.25 below:

It graces the colophon8 of the item which kicks off with this wonderful title page:

This example is followed two years later by a variant, as seen here in Bolton Library I.17.22, sporting rather generously bewhiskered individuals:

A third variant, for which we can only suggest a date between 1502–1515, is somewhat cleaner in detail.

Also present in this leopard and lion device are armorini in the foliage above, one of whom holds a stick, possibly fending off an attack by other birds on an owl perched nearby. This motif will be dropped in the later two lions device.

A knot appears at the centre of the shield here, again denoting Petit’s address at the time, and this knot appears with leopard and lion supporters, just as a fleur-de-lys will accompany two lions after his move to the sign of the lily.10