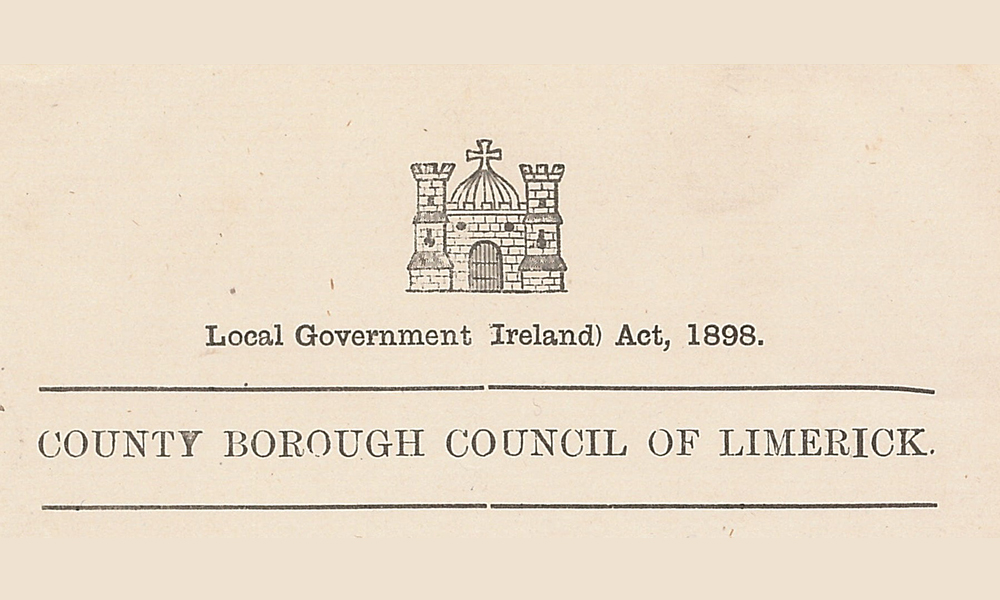 Among the archives held in the Special Collections and Archives Department at the Glucksman Library are four collections relating to a number of former Mayors of Limerick. These collections cover a significant period of Limerick’s history from the 1880s to the 1990s. The collections run to 148 archival boxes and contain a wealth of primary sources including personal letters, photographs, press cuttings and ephemera which inform Ireland’s journey from Fenian times to the twentieth century, through a Limerick lens.  Much of the archival content relates to the personal, political and business affairs of the individual mayors.  This post provides a brief biography of each Mayor and highlights some of their key endeavours, as well as key items of interest from the archives.

John Daly was born in Limerick City on 18 October 1845. At the age of 18, he became a member of the Irish Republican Brotherhood (IRB) and went on to play a leading role in the Fenian Rising of 1867. He served 13 years (1883–1886) in prison in England for his part in the Fenian Dynamite Campaign. After his release Daly spent some time in the USA before returning to Limerick in 1898. At this time the Local Government (Ireland) Act 1898 was passed which extended the vote to all householders and abolished the property qualifications for municipal councillors thus enabling Daly to assuredly stand for election as a representative of the labouring class. John Daly was elected three times as Mayor of Limerick City, from 1899 to 1901.

The Daly Papers contain material predominantly relating to John Daly and his republican background. Many well-known contemporaries whose contributions comprise the archive include Thomas Clarke, Seán Mac Diarmada, Ned Daly, Kathleen Clarke, Madge Daly, Edward Dore, Patrick Pearse, Constance Markievicz and Maude Gonne MacBride. An item of interest from his time as Mayor which provides an insight into his life in both local and national politics is a letter from John Daly to Thomas Clarke concerning his (Daly’s) efforts to help the large number of unemployed in Limerick while also confirming that he will grant Clarke the Freedom of Limerick. (P2/2/1/18/12). The archives contains photographs, press cuttings, journals, magazines, ephemera and artefacts.  Among the unique artefacts is John Daly’s seal of office as Mayor of Limerick (P2/4/1/1). A catalogue of the Daly Papers is available on our website.

James O’Mara (1817–1899) was active in business and politics in Limerick from the mid to late nineteenth century. He established O’Mara’s Bacon Company in 1839. He was High Sheriff of Limerick City in 1887 and acted as Town Councillor on Limerick Corporation at least from 1888 to 1898. He was a nationalist politician and a supporter of Isaac Butt’s Home Rule movement. He was nominated as Mayor of Limerick but declined. One of his sons (Stephen) and two of his grandsons (Alphonsus and Stephen M.) would later go on to serve as Mayors of Limerick. 1

Stephen O’Mara (1844–1926) was elected Mayor of Limerick in 1885. He served again in 1886 and was the first nationalist Mayor of Limerick. Like his father James, he was a supporter of Isaac Butt’s Home Rule movement. He was elected Member of Parliament for Upper Ossory in Kilkenny South for the Irish Parliamentary Party in February 1886. He served as High Sheriff of Limerick City in 1888, 1913 and 1914. He supported Sinn Féin in the general election of 1918 and took a pro treaty stance after the Irish War of Independence. He was elected to the Free State Senate in 1925. 2.

Alphonsus ‘Phons’ O’Mara (1887–1958) served as Mayor of Limerick from 1918 until 1920. He was a member of the Irish Parliamentary Party and was a staunch supporter of the Republican movement. O’Mara took a strong anti-conscription position as Mayor during WWI, and in 1919, he ‘Phons’ was instrumental in bringing an end to the general strike in Limerick (Limerick Soviet). 3.

Stephen M. O’Mara (1884–1959) served as Mayor of Limerick from 1921 until 1923. He joined Sinn Féin after the 1916 Rising and was a member of Limerick Corporation when the Irish War of Independence began. Following the killing of the then Mayor of Limerick, George Clancy, on the 7th March 1921, Stephen stood for election and was voted into office on the 22nd of March.

In May of that year, Stephen was tasked with overseeing a fund-raising campaign in the USA to finance the first Dáil.  He was re-elected in 1922 and opposed the Anglo-Irish Treaty but resigned before the expiration of his term of office. In December 1922, Stephen O’Mara was arrested and interned for four months in Newbridge Barracks and Mountjoy Prison. He was released in March 1923 shortly before the end of the civil war. Material relating to his parents and siblings is sketchy. Items of interest from his time as Mayor, his time in prison and his role as fundraiser and Special Envoy to the USA are detailed in references numbers  P40/384–460. 4. A catalogue of the O’Mara Papers is available on our website.

Frances Condell (1916–1986) served as Mayor of Limerick from 1962 until 1964. Condell entered local politics in 1960, when she was elected as a non-political and first female Councillor to Limerick City Council. She was nominated and elected mayor of Limerick in 1962, the first woman to be officially voted into this position in Ireland. She was re-elected as Mayor in 1963, during which term she was to host several visiting dignitaries, most notably President John F. Kennedy, Senator Edward Kennedy, President Kaunda of Zambia, Cardinal Browne, and ‘Lady Bird’ Johnson, wife of President Lyndon B. Johnson. Condell withdrew from political life in 1967 owing to health problems.

Items of interest in the Condell Papers relating to her political career (1960-1966) include correspondence, speeches, press cuttings, photographs and taped interviews. Collection highlights include letters signed by President John F. Kennedy, Senator Edward Kennedy and Mrs Lyndon B. Johnson. A catalogue  of the Condell Papers is available on our website.

Jim Kemmy (1936–1997) served as Mayor of Limerick from 1991 to 1992 and again from 1995 to 1996. He qualified as a stonemason in 1957 and worked as a brick layer for Limerick City Council. He became involved in the Brick and Stonelayers’ Trade Union, and was elected Branch Secretary in 1962. A year later, he joined the Labour Party and following disagreement within the party he resigned in 1972 and went on to establish the Democratic Socialist Party (DSP). The DSP merged with the Labour Party in 1990.

In his role as Mayor, one of his first gestures was to donate his £16,000 Mayoral salary to counterbalance cutbacks in city contributions to 25 local organisations. He opened the doors of the City Hall to ordinary people, holding receptions in honour of everyone and anyone who had represented the city well, from gifted students to local award-winning darts clubs. He was also the first Mayor of Limerick ever to attend at the War Memorial on Remembrance Day in his official capacity. The Kemmy Business School at the University of Limerick has been named in his memory. A catalogue of  the Kemmy Papers is available on our website.

Do you recognise these words?

The musings of former owners are revealed