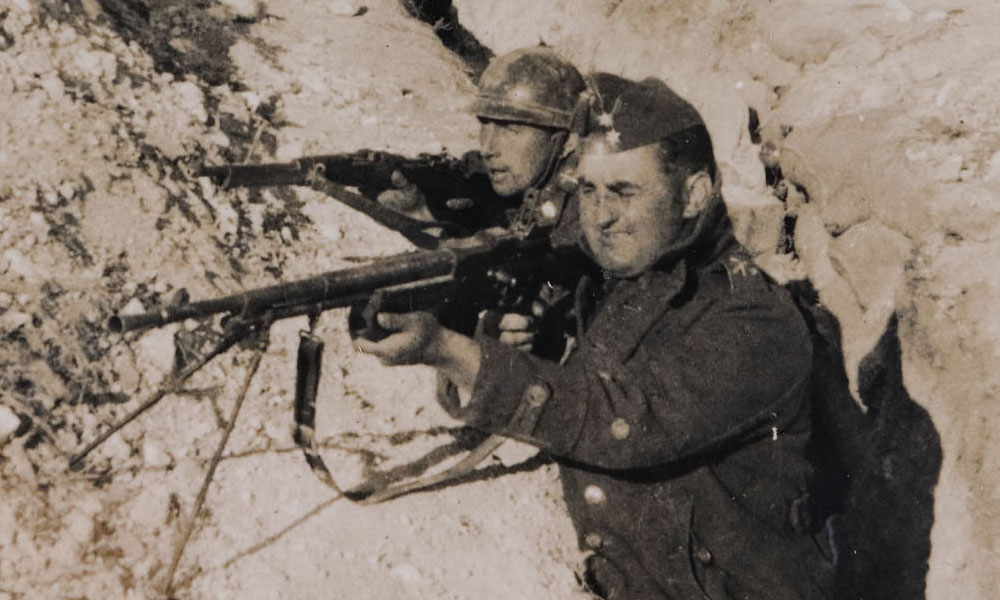 The 17th of June 2021 marks the 85th anniversary of the start of the Spanish Civil War (1936–1939). This blog post takes a closer look at the conflict, the Irish support for it and its unfortunate consequences for the Limerick author Kate O’Brien.

By the early 1930s, Spain was an ideologically polarised country. Two conflicting forces – one socialist, liberal, secular and republican, the other monarchical, conservative, Catholic and nationalist – vied for power but neither succeeded in exerting it to a sufficient degree to gain the upper hand. Matters came to a head in 1936, when the republican side won a narrow electoral victory and the nationalist side under the command of General Franco attempted a military coup. The violent conflict rapidly escalated into a civil war for which both sides sought assistance from abroad. The nationalists found it in Germany and Italy, and the republicans in the Soviet Union and Mexico. Both sides also benefited from the support of diverse groups of foreign volunteers.

Irish Support for the War

In Ireland, the nationalist politician Eoin O’Duffy (1890–1944), a veteran of the Irish Civil War and admirer of Mussolini, raised an Irish brigade to fight on Franco’s side. Some seven hundred men followed him to Spain, bolstered by support from the Catholic Church. However, religion was not the only motivating factor. William Geraghty, a volunteer from Dublin, summed up his reasons for joining by explaining that ‘in my limited learnings of the history of the friendship that existed between Spain and Ireland and all that Spain tried to do in the sad times my forefathers experienced, the Spanish Armada, giving sanctuary to the O’Donnells and all the rest… I felt indebted to Spain for their kindness to… our ancestors’.1 For Phil McBride from Newbliss, County Monaghan, the motivation was political. ‘The communists were a real threat’, he explained, ‘and were it not for the Germans they probably would have dominated Europe. You had to take a stand somewhere.’2

A much smaller group of some 150 Irishmen, led by Frank Ryan (1902–1944), joined the war on the republican side as part of the Abraham Lincoln Brigade of international volunteers. This Irish group, named ‘the Connolly Column’ in honour of the Easter Rising hero James Connolly, included men of socialist and anti-fascist leanings as well as IRA veterans of the War of Independence and the Irish Civil War who felt a sympathy for the Spanish Republic.

The Irish Experience in Spain

The two groups of Irish participants had very different experiences of the Spanish Civil War. For O’Duffy’s volunteers, the conflict was short-lived. The men in the Irish Brigade were young and enthusiastic but ill-prepared for the harshness of conditions at the front. Drunkenness and indiscipline were rife and morale low, fuelled by bitter enmity and infighting between O’Duffy and his officers. By spring 1937, Franco had grown tired of O’Duffy’s lack of military experience and ordered the Irish Brigade to leave Spain. Although the volunteers were met in Dublin by a small crowd of supporters, it was far from the heroes’ return of which O’Duffy had dreamt. In contrast, the Irish volunteers on the republican side fought gallantly on several fronts between 1936 and 1938 and suffered heavy casualties. By the time the war ended in Franco’s proclamation of victory on 1 April 1939, sixty-one men from the Connolly Column had lost their lives and many more were injured.

The Spanish Civil War also had unfortunate consequences for a rising Limerick author, Kate O’Brien (1897–1974). Kate’s lifelong attachment to Spain began in 1922, when she moved to a village near the Basque city of Bilbao to work as a governess for the children of the Areilza family. The ten months she spent in Spain provided the inspiration for her third novel, Mary Lavelle, published in 1936. Several subsequent visits followed, most importantly in 1935, when she and the artist Mary O’Neill toured the country ‘From Aruna & Santiago de Compostela… through Castile to Segovia, Salamanca, Avila & Toledo.’3  During her many visits, Kate could not help noticing and being troubled by the growing tensions in the country. They also featured in her travelogue, Farewell Spain (1937), written between October 1936 and February 1937. Although Kate deliberately adopted a sentimental tone and filled the book with descriptive comments and amusing anecdotes gleaned during her many visits, its political agenda was undeniable. Contrary to the general opinion of her countrymen, Kate’s sympathies rested firmly on the republican side of the conflict. The title of her travelogue came to be prophetic: her open criticism of Franco prevented her from returning to Spain for two decades until her brother-in-law’s nephew, Dr Michael Rynne, used his position as Irish Ambassador to Spain to resolve the matter by diplomatic means. Whether Kate’s travel ban was due to Spanish censorship or self-censorship is subject to debate; however, at least one of her letters, written in August 1957, in which she praises Michael Rynne for ‘being excellent – doing exactly what will most help my case’,4 would seem to support the former viewpoint.

Even during her exile, whether imposed or self-imposed, Spain remained central to Kate’s life.  It featured prominently in her novel That Lady (1946) and was reflected in her portrait of the Spanish saint, Teresa of Avila (1951). After 1957, Kate resumed her annual visits to Spain.  In 1961–1962, she spent the entire winter in Avila.  As the time of her departure drew closer, she expressed regret at the prospect of leaving. ‘Still, passages of life must end’, she consoled herself, ‘so many have indeed, & one survives their vanishing.’5