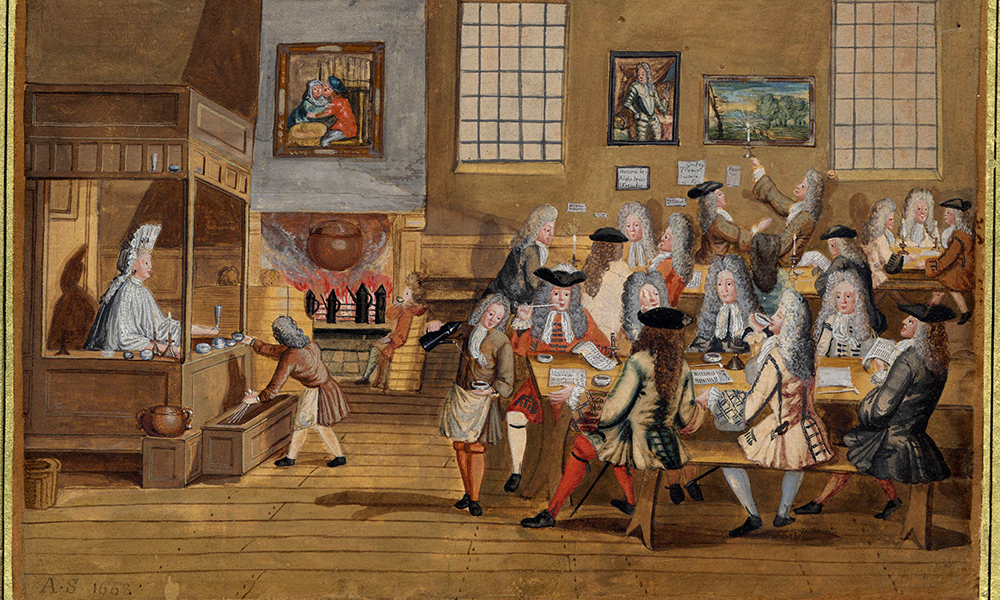 In 2016, the Special Collections and Archives Department purchased a manuscript volume of copied letters written down between 1702 and 1712 by an apparently unnamed author. After some intensive reading and much head-scratching, the writer revealed himself to be one Thomas White, a solicitor and land speculator with chambers in London’s Temple.

The volume’s unassuming appearance belies its vivid contents. Thomas’s lively writing style and plucky character captivate and transport the reader right to the heart of the ups and downs of life in the first decade of the eighteenth century. When Thomas began his letter book in 1702, he was just twenty-six years old but already prosperous, having as an only surviving son inherited from his father, Stephen White, a wealthy London merchant. Many of Thomas’s letters are concerned with the management of his extensive portfolio of properties, which included ‘an Estate in the Barrony of Clonnelloe in the County of Lymrick, I think within 5 miles of the City containing 1469 acres 12 Rood & 38 pearch Plantation Measure’.1 His attempts to find new tenants for his Limerick estates and an agent to collect their rents feature prominently, as does an exceptionally troublesome Irish tenant, George Evans. When their long-standing dispute over unpaid rent was finally resolved, Thomas praised his Dublin solicitor ‘for the services you have don me in my affair with Coll Evans, we have gained a glorious victory over a difficult Enemy’.2

Further complicating Thomas’s business activities was the War of the Spanish Succession (1701-1714), which affected the financial markets and frustrated land transactions. In the wake of rumours of imminent peace in May 1709, Thomas notified Messrs Meade & Copley in Newcastle, County Limerick of his decision to ‘defer sending you the foul Draft of your Lease in confidence of a speedy peace, for Since the Preliminaries are all agreed, & that it is very probable it will be proclaimed & ratified in a short time, I think it better for us both to defer the Leases till then’.3 Six weeks later, he was forced to write again to regret that ‘The hopes of a peace being contrary to every bodys expectation blown over, ’tis now so uncertain when that happy day will come that I think it improper to defer the Leases till that time’.4 And so the war rumbled on for another five years. At least Thomas did not go as far as the Duke and Duchess of Marlborough, who ‘were So confident of an undoubted peace that the following Inscription was put upon one of the foundation Stones of the House now building at St Jameses… viz This Stone was laid by John & Sarah Duke & Dutchess of Malbourough in the Year of peace’.5

Not all of Thomas’s letters deal with business. He provides a vivid account of the damage done by the great storm of 1703, which claimed the life of Rear-Admiral Basil Beaumont.6 In March 1708/9, another natural calamity shook the country. ‘The Thames I presume you may have heard has been thrice frozen over’, Thomas wrote to his friend Sigismund Trafford, ‘& twice so as for persons to walk cross, & four ought I know 10 days more of the present Weather might make a fourth Wonder, The Streets were in Some places almost rendred unpassable, & it was no new Thing to see Coaches overturn’d & Stuck fast’.7

Court gossip and scandal also feature prominently. ‘Mr Lythe the Master of St Dunstans Coffee house attempted last week to destroy himself by Three severall deaths in the space of a quarter of an hour but failed in all’, Thomas rushed to share the grisly news with Sigismund. ‘The First he endeavoured to hang himself three times upon his Chamber door, but though he Gutted his neck raw he could not choak himself afterwards he Stabbed himself 12 Times in the belly with a penknife & then threw himself headlong down Stairs, He is Still alive & like to live, but much distracted & tho he has left himself an animal he has not left himself a man’.8

No less vivid are Thomas’s descriptions of the series of state lotteries in 1710-1711 established to raise government revenue for the War of the Spanish Succession and the pandemonium they caused when people scrambled to purchase the tickets issued for sale. Thomas, too, invested considerable sums in the venture but after several disappointing rounds was forced to concede that ‘I doe not find that I am like to grow rich by Lotterys’.9

During the years the letter book was compiled, Thomas was unmarried. He complained that ‘good wives are so scarce that I am afraid I shall live to be an old Batchelour, if the World is so mercifull as not to think me one already.’ We are happy to report that in 1718, he found the perfect match in Olive Western, daughter of Maximilian Western of Abington Hall, and reared a family of two daughters and a son. He died on 23 November 1742, ‘possessed of a very large Estate’ in Suffolk.10

Thomas White’s letters open up a vivid and multi-faceted view into the life of the prosperous middle class in the first decade of the eighteenth century. We are delighted to add it to our new collections and share it with our readers.