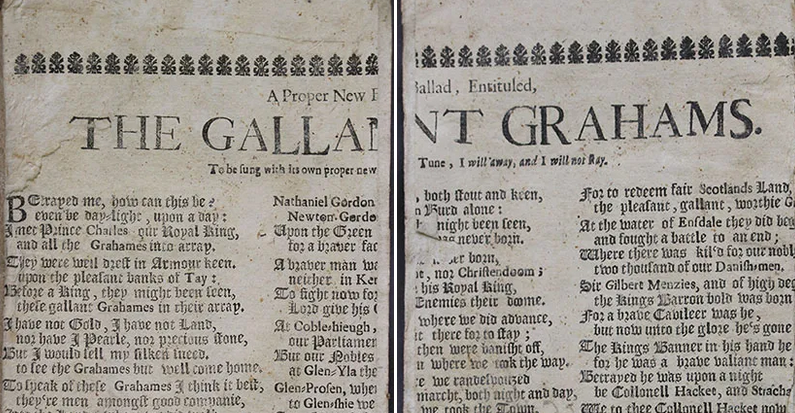 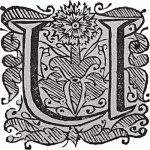 Under the covers of Parallele des anciens et des modernes (Amsterdam : George Gallet, 1693), an item acquired by Bishop William King of Derry in February 1695 for five shillings six pence,1 and used as bookbinder’s waste, are two halves of a broadside2 ballad.

Inside the front cover is pasted the left-hand side of the broadside featuring The bloody battle, or, The most furious fight between the armies of the English and French, in famous Flanders, on the 25th day of July, 1692,

while the rear cover bears the right-hand side, which features The young lasses lamentation, or, Virginity grown troublesome.

Any imprint which the item may have borne has been chopped away with its final lines of text, pared here at the tail to fit inside its new home in the item’s calfskin binding, so an exact dating of the item is difficult, but we can be confident that it was issued after July 25th 1692.

All searches by this cataloguer to find another copy of this broadside have come to naught.

Split and bound inside the front and rear covers of A discourse of natural and moral impotency (London : Robert Clavel, 1675), a theological essay on a Christian conduct of life by Joseph Truman (1631–1671),

is the top half of ‘a proper new ballad’ celebrating the role of the Graham family in defending the Stuart cause in 17th century Britain.3

We have here a similar problem to the one encountered above: any imprint which the item may have borne has been chopped away, pared at the tail to fit its new home inside its binding, so an exact dating of the item is difficult, but a tentative mid-17th century date seems likely.

No digitised version or catalogue record4 of this ballad is an exact match to the copy bound here. The Bolton Library waste bears the words ‘Grahams’ and ‘a proper new ballad’, as opposed to the ‘Grahames’ and/ or ‘excellent new ballad’ which appear in all other known versions.

In an exciting postscript, and a couple of years after the discovery of the above, a portion of the tail of this very copy was discovered inside Bolton Library I.8.23, a tome on the Lord’s Supper published in 1684.

An exact match to the pieces inside Bolton Library I.10.44 can be discerned along the tear lines, through the sentence ‘Prince Charles also, our royal king‘.

Finally we have, split and pasted inside the covers of the anonymous Devout communicant exemplified in his behaviour before, at, and after the sacrament of the Lord’s Supper (London : Thomas Dring, 1688), an edition of the broadside Leader-haughs and yarow, the lower half of which has been bound in at the front and rear to strengthen the item’s calfskin binding.

The fragments do not match any versions digitised to date. In digitised copies, line 4 from the end terminates with ‘… somewhat long’,5 whereas in the Bolton Library fragment that line ends in ‘… somewhat’.