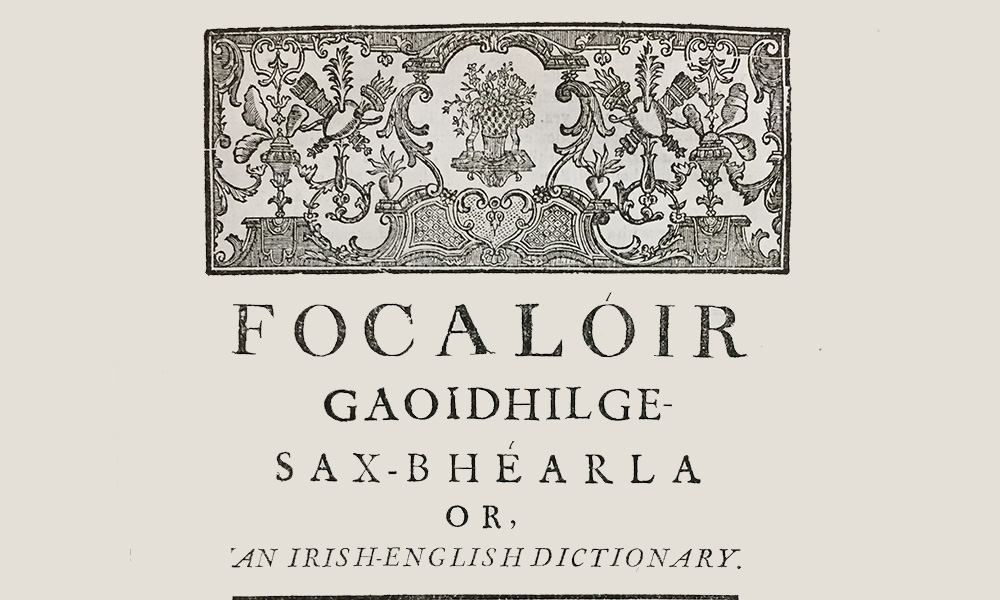 Born in Co. Cork, John O’Brien was educated in France. He returned to Co. Cork to an area rich in Gaelic living literature. An advocate of Irish language and literature, he supported local poets and scribes and commissioned copies of manuscripts. In 1768 his Irish-English dictionary was printed in Paris.

In addition to Conor O’Begly’s English–Irish dictionary, An Foclóir Béarla–Gaoidheilge, published in Paris in 1732 (see earlier blogpost here), the Dónal Ó Súilleabhán Collection holds a copy of O’Brien’s Focalóir Gaoidhilge–Sax–Bhéarla or an Irish–English Dictionary. published in 1768. The editor, John O’Brien (Seán Ó Briain) (c.1701—69), Roman Catholic bishop of Cloyne and Ross, was born near Glanworth, Co. Cork. He attended the Irish seminary in Toulouse in the early 1720s and continued his studies in Paris. In 1733, at the University of Toulouse, he graduated Bachelor of Divinity having already gained qualifications in civil and canon law. Over the following four years he worked as a tutor to the sons of Irish émigré families in France and Spain.

In 1738, John O’Brien returned to Ireland to work as the parish priest of Castlelyons and Rathcormack, Co. Cork. He set up residence in Castlelyons, near Carraig na bhFear (Carrignavar), an area where Gaelic traditional literature still flourished. In this locality a Cúirt Filiochta (court of poetry) continued to be convened regularly under the patronage of the McCarthys and led by Seán na Ráithíneach Ó Murchadha (1700—1762). O’Brien was an active supporter of local scribes and poets. Three sermons by him in Irish, (one a translation from French), survive from the period 1739—40. 1 Morley notes that: ‘blockquote’ His interest in the language was scholarly as well as pastoral and he assembled a collection of manuscripts that included annalistic, genealogical, and pseudo-historical material. 2 By 1748 John O’Brien had been appointed bishop of Cloyne and Ross and later he went on to establish bursaries in the Irish Colleges of Paris and Louvain.

Compilation of the dictionary

Under O’Brien’s patronage, the compilation of the text of Focalóir Gaoidhilge—Sax-Bhéarla, was completed by 1762. Although anonymous, the work on the short entries has been attributed to Sean Ó Conaire (Rev John Connery) (c.1739—1773) and Mícheál Mac Peadair Ó Longáin (c.1693—1770). 3 Mícheál Mac Peadair Ó Longáin (elder of the well-known scribal family) was born in County Limerick and later settled in Carraig na bhFear (Carrignavar).

The main body of the dictionary draws heavily from Lhuyd’s Archaologia Britannica (1707). It is supplemented by entries from Irish manuscripts. Sources include Míchéal Ó Cléirigh’s ‘Foclóir nó sanasan nua’ 4 and Richard Plunkett’s dictionary manuscript (unpublished), held in Marsh’s library. Edward Lhuyd (1660—1709) was the first scholar to establish the connections between the Celtic languages.

Editing and raising of funds for printing

The work of the final editing, of writing the long introduction, and of providing additional information on Irish history, place-names and genealogy is acknowledged to be that of O’Brien, who sought assistance with the costs of publication from the Congregatio de Propaganda Fide in Rome, proposing that the dictionary was essential for pastoral work. The Clóliosta cites a letter from Cloyne, dated 20 November 1764 in which: ‘blockquote’ John O’Brien appealed to the ecclesiastical authorities for funds to print a dictionary compiled under his direction and said to have been ready for two years. 5

On 20 April 1765 he wrote again to Rome stating that price of printing was 140 guineas and requesting help with half of the cost.6 In the end the Congregatio declined to fund the publication but the prefect of Propaganda, Cardinal Joseph Maria Castelli, did make a personal donation.

In fact, the text was ‘more literary than colloquial in scope’. 7 Bishop John O’Brien left Ireland in 1767 and one year later he succeeded in seeing his dictionary come through the printing-press of Nicolas-Francis Valleyre in Paris.

In 1769, the Journal des Sçavans (the earliest academic journal published in Europe), published an account (in French) of O’Brien’s preface to the dictionary. 8 Bishop O’Brien remained in France and died in Lyons in the same year.

In 1962 President Eamon de Valera unveiled a monument, ‘Faiche na bhFilí’ (the poets’ green) in the centre of the village of Carraig na Bhfear (Carrignavar), dedicated to the writers of the area (including Bishop John O’Brien) and its rich local Gaelic literary tradition.

Some of the annotations in Dónal Ó Súilleabháin copy include:

Can you help identify these places?