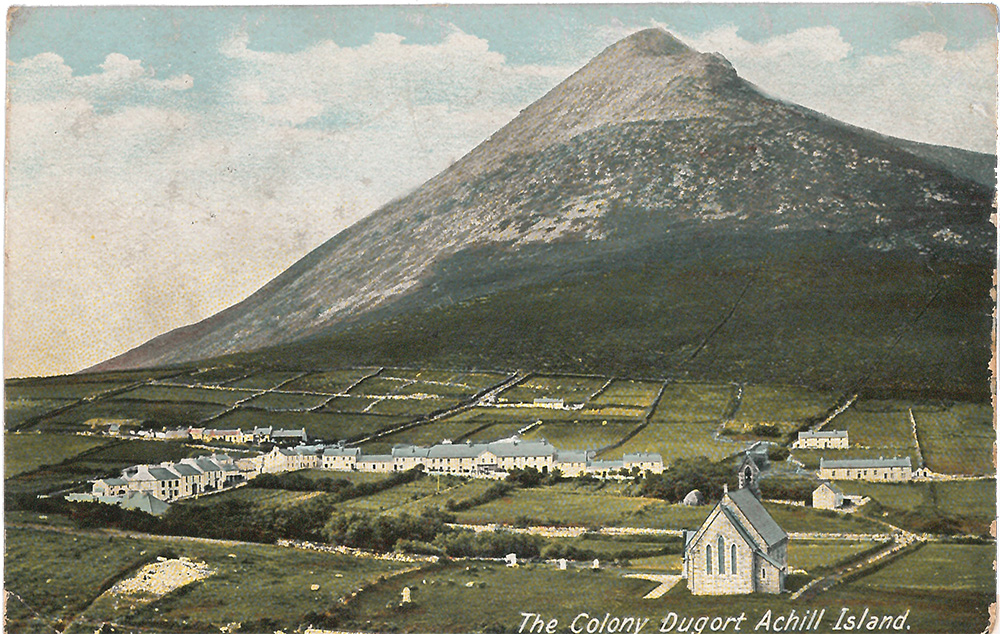 UL Special Collections and Archives has recently acquired a rare nineteenth-century document concerning the infamous Protestant mission which existed on Achill Island, County Mayo from 1834 until 1883. The handwritten seven-page document, entitled ‘Copy [of] Prospectus, Protestant Missionary Settlement in the Island of Achill’, dates from circa 1848.

During the first half of the nineteenth century, a campaign – often referred to as the Second Reformation – to convert Catholics in Ireland to Scriptural Protestantism took place. Conversion movements such as the Irish Society (1818), the Achill Mission (1834) and the Society for Irish Church Missions to the Roman Catholics (1849) were established chiefly by English Anglicans and Church of Ireland clergymen. 1. The main aim of such movements was the conversion of Irish Catholics to Protestantism. At the time, it was thought that cultural change would be enabled through Evangelical schooling and by experiencing a superior way of living.

In 1831 the western part of Connacht suffered severely from famine. Reverend Edward Nangle, a Protestant evangelical minister, accompanied a cargo of food despatched from Dublin to feed the starving people of the west. Nangle used the visit to assess the actual situation on the island and its suitability for a proselytising mission. Nangle concluded that the island would be a suitable setting for attempting to convert the Roman Catholic population.

In 1833 he commenced the building of a Moravian-styled settlement in the townland of Dugort.2 Nangle – referred to as ‘The Apostle of Achill’ by his biographer Rev Henry Seddall – made significant progress with the creation of the Mission village, which included a church, schools, hospital, orphanage, dispensary, post office and printing press.

Archbishop John MacHale: The Lion of the West

In 1834 Bishop John MacHale was appointed Catholic Archbishop of Tuam. In 1837 he visited Achill to assess the progress of the Mission. Alarmed by the pace of the developments, MacHale sought to circumvent Nangle’s proselytising efforts in any way that he could. He immediately began to stir up the populace against what he called these “venomous fanatics.” 3

This document emerges approximately fifteen years into the Mission’s tenure and its purpose was to appeal for funding from sympathetic benefactors for the purchase of the Island of Achill from the resident landlord, Sir Richard O’Donnell.

Members of the Mission committee are listed on page one followed by a brief outline of the Mission’s background, purpose, progress, expansion and future plans. Page two describes the opposition it encounters on the ground from the Catholic Church and its followers and the impact of this on the Mission’s schools. Accounts are given of harassment and serious assault of its personnel by local Catholics even to the point where “a warm friend of the Mission was murdered”. Despite strong resistance from some of the local population, the Mission is doing well and its key achievement are outlined, such as, the establishment of: an Orphan Refuge, an Asylum for Roman Catholic Priests; a Hospital and Dispensary; a printing office and a “commodious hotel.”

Mid way through the document the Great Famine is mentioned and how at this time the ‘Priests discontinued their confessions when the people were unable to pay them. The sick were often permitted to die without being anointed and for months together no Mass has been celebrated in the Island’. It goes on to say that the efforts of the Mission to relieve the locals of their distress ‘has turned the tide of popular feeling against Romanism and in favour of Scriptural Christianity”. Divine Services in the Irish language is now provided throughout the island and “the native children have almost all been gathered into Irish Schools, in which they are receiving a thoroughly Protestant Education.”

The Mission is confident of success but needs to consolidate its position by purchasing the island from the landlord, Sir Richard O’Donnell. A plea is made for funding to achieve this goal and in the event of it being unsuccessful “the money will be returned to such of the contributors as desire or it will be vested by the Trustees in the funds and the interest applied to the above purpose”. After a relatively successful fund-raising campaign the Achill Mission purchased most of Achill from Sir Richard O’Donnell through the Encumbered Estates Court in 1852. 4

Possible Use to Researchers

This document is a good example of a primary source that will be of interest to students of religious conflict in 19th century Ireland. The literature regarding the Achill Mission points to its decision to buy a large swathe of Achill as a defining moment in its history. Following the purchase of Achill, the Mission became a landlord and resources were divided between evangelical endeavours and the business of running its Achill estate. This resulted in the evangelical side of the Mission being sub-let to a third party which caused much disagreement and conflict between Revd. Nangle and members of the committee. This archival nugget is a seminal document from the period which shows the strategy used by the Mission to consolidate its position on Achill and the people involved in the process. It gives a unique first-hand account of the perspective and philosophy of the Evangelical movement during the 19th century. It may be viewed, in effect, as a blueprint for the strategy adopted by the Mission to appeal for funding and to further the cause of the conversion movement. Among the themes found in the document are: attitudes towards inhabitants of Achill; social conflict and religious conversion; education; the Irish language and religious conversion; the Great Famine and political change; modernisation and farming and the disharmony between the Protestant Church and the Church of Rome.

Secondary sources held in Special Collections and Archives relating to this topic include: