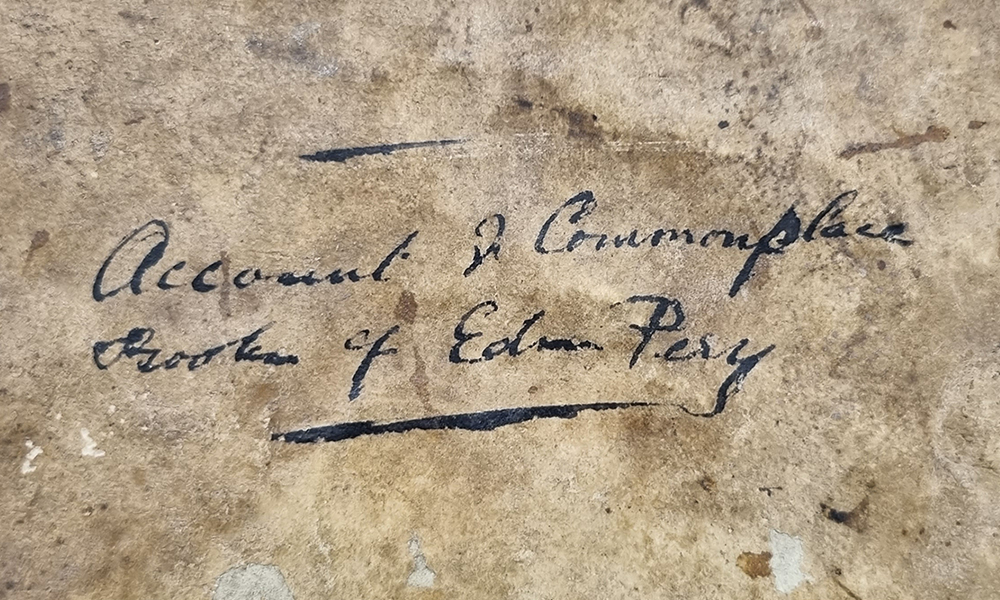 Since 2018, the Limerick Papers (P51) have been on loan at Special Collections and Archives, Glucksman Library, courtesy of the present 7th Earl of Limerick. The Perys made their mark on Limerick in the late eighteenth century with building projects that continue to give parts of the city a unique Georgian character. A vocal supporter of the Union of Ireland and Great Britain, Edmund Henry Pery (1758–1844) was raised to the Irish peerage as the 1st Earl of Limerick in 1803. The collection at UL contains 12 boxes of materials relating to the Perys and associated families of Sexten and Stackpole, dating from 1535–1681 and 1832–1913.

A leather-bound window of knowledge

One of the treasures in this collection is the Commonplace Book of Edmund Henry’s ancestor, Colonel Edmund Pery of Stackpole Court in County Clare (P51/2/1). Commonplace books were private notebooks used to record and digest different types of information. Pery’s 172-page volume dating from 1671–1681 is bound by coarse leather.

The variety of information and topics in Pery’s commonplace book makes it an unpredictable yet engrossing read. The first pages in this book record financial matters within the family with relatively neat accounts and bills written by Colonel Edmund Pery. These accounts kept track of finances relating to many aspects of life such as small payments to family members, funeral expenses, and rent received from tenants.

Pery titles a section within these accounts ‘Sept 13, 1680 – I came out of England to Limerick’ which gives an insight into his personal life and situation. It is in this section where there are many accounts of rents received from tenants in properties around Limerick such as Thomond Gate and Mongrett [sic] Gate.

Leaving several blank pages after the accounts in this book, Pery begins his commonplace book properly covering a variety of themes and topics. The first section mostly deals with numbers as he documents weight conversions, ‘the measures of beer and other liquids’, and the exchange rate for multiple currencies. It is clear that Pery had access to information about ‘domestique and forraine’ currencies at this time. As well as noting information on currencies in European countries, he also covers Asian countries such as Japan.

The geographical theme continues into the next part of the book as Pery documents the number of acres in the ‘Kingdoms and Provinces’ across Europe. Once again, he covers a wide selection of European countries, with information on the acreage of provinces in places such as Rome, Venice and Germany.

A fascinating aspect of this book is Pery’s notes on how the calendar, the moon and the sun could be used to help gather information on a copious number of topics. Examples of such are his noting of methods on how ‘to know the age of the moon’ and how ‘to find Shrove Tuesday’. These entries make for an interesting read as they are a reminder to the reader of times where information was not as readily available as it is now and how men like Pery found these intriguing and worthy of noting.

Pery also notes how to pronounce words as well the correct way to use countless verbs and nouns; these and other topics in this commonplace book were likely extracts from contemporary publications.

From equine cures to hair care

Thirteen pages of Pery’s commonplace book are dedicated to topics centered on caring for one’s horse. The length of this section indicates how important horses were in society in seventeenth-century Ireland. The beginning of this equine section is titled ‘Directions about Horses’ and is followed by an incredibly detailed entry on how to tell ‘the marks of a good horse’. This is followed by ‘to know a horses age’ which informs the reader how to tell the age of a horse by looking at its teeth, a method that is still widely used today. Most of the pages however consist of instructions and remedies for treating many different illnesses that could afflict horses. These remedies are mostly recipes made up of relatively basic items such as oil, milk and eggs that would have been and are still available to the majority of households.

Pery not only includes recipes for horse care but also examples of personal care methods that are telling of the time. He noted, for example, a recipe and method to make a plaster out of green bean husks which when applied to the skin should make the hair fall out and prevent hair from growing back in future. He also wrote notes on how to make hair curl which included burning sheep horns, mixing them with oil to make a paste that was rubbed onto the hair frequently. These pieces offer an insight into the variety of personal care that people incorporated in their everyday lives.

This seventeenth-century commonplace book is a deeply interesting and occasionally amusing insight into Colonel Edmund Pery’s mind, interests, and access to knowledge.