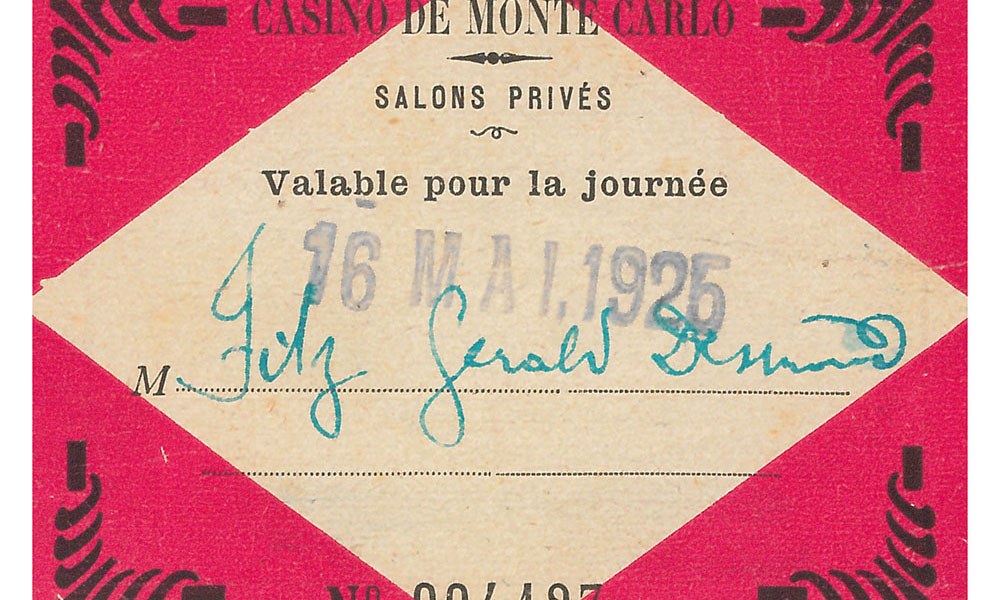 The 14th of September 2021 marked the tenth anniversary of the death of Desmond FitzGerald, 29th Knight of Glin (1937–2011).  A leading figure in Irish architecture and decorative arts, his interest in these subjects was fuelled by his ancestral home, Glin Castle, and its vast collection of fine arts and furniture accumulated by generations of remarkable forebears.

The Knights of Glin are a Geraldine family who trace their origins in Ireland to Maurice FitzGerald, a companion-in-arms to the Norman conqueror Strongbow.  Their romantic title is a corruption of the Irish word ‘Gleann’ (valley), which itself is an abbreviation of Gleann Corbraighe (now the townland of Glin).  The long and colourful history of the FitzGeralds, from their arrival as conquerors to their becoming ‘more Irish than the Irish themselves’, is well recorded.  It is a story of the struggle of a Catholic landed family against English rule, and ultimately its capitulation when the Penal Laws came into effect.

Desmond FitzGerald, the 29th Knight of Glin, had no shortage of colourful ancestors.  Edmond, the 20th Knight of Glin (d. 1763) had a passion for gambling, which landed him in prison for non-payment of debts.  His brother and successor Richard (d. 1775) preferred duelling and also excelled at horseracing.  John, the 23rd Knight of Glin (d. 1803), inherited enormous debts from his reckless uncles but nevertheless managed to initiate the building of Glin Castle, in which the family continue to live.

John Fraunceis FitzGerald (1791–1854) began his tenure as 24th Knight of Glin with a bankruptcy but managed to replenish the family coffers through gambling.  He was known locally as both ‘Ridire na mBan’ (Knight of the Women) due to his extra-marital activities, and ‘Seán Gruama’ (Grim-faced John) due to his bouts of temperamental behaviour.  His colourful character even found expression in a local ballad in 1830, the first verse of which declared:

His vices have made, and still make him so poor
That bailiff or creditor is ne’er from his door.
And deep tho’ in debt, he’s deeper in sin,
That lecherous, treacherous, Knight of the Glin.

However, John, a fluent Irish speaker, was also generous towards his tenants, particularly during the famine.  He died of cholera in 1854 which he contracted while attending to the unfortunates in the Poor House in Glin.  His son, John Fraunceis Eyre FitzGerald, 25th Knight of Glin (1813–1866), also known as the Cracked Knight, inherited his father’s eccentric and temperamental nature.  This manifested itself among other things in an obsession with chamber-pots and a lamentable decision to burn the family papers in a fit of rage.  As a consequence, the Glin Papers no longer reflect the long history of the family.

From Garages to Casinos

The 29th Knight’s father, Desmond Windham Otho FitzGerald, the 28th Knight of Glin (1901–1949), had an interest in mechanics.  In 1924, he set up a garage in the fashionable St James Street area of London with a Captain Alistair Miller, the son of a Scottish baronet. The business, called Miller & FitzGerald Ltd, specialised in trading in exclusive cars. While in London, the 28th Knight was also one of the ‘Bright Young Things’, a group of young fashionable people in the 1920s known for their outrageous behaviour.  His diaries are filled with endless accounts of dining out, parties, concerts, dances and trips to the casino. When the high life got too much, he set off on sailing trips to the Mediterranean and back, some lasting as long as three or four months.

In 1929, he married Veronica Villiers, a dynamic and strong-willed woman who focused her energies on restoring Glin Castle. The couple also improved the adjoining farm to make it commercially viable.  Sadly, Desmond Windham Otho contracted tuberculosis and suffered from long periods of illness. He sought treatment abroad but finally succumbed to the disease in 1949, leaving a young widow and three children.

In 1954, Veronica married Horatio Ray Milner, a wealthy Canadian businessman, and relocated to Canada. Milner was instrumental in saving Glin Castle and the estate from certain financial ruin by investing £60,000 in restoration work in the late 1950s.

The Last Knight of Glin

Desmond John Villiers, the 29th Knight of Glin, was born on 13 July 1937 and educated in Stowe, England; Trinity College, Port Hope, Ontario; University of British Columbia; and Harvard University. At the age of 12, when most boys used their spending money on chewing gum and comic books, Desmond made his first venture into decorative arts by purchasing an ornament for the gardens at Glin Castle.  So began a lifelong career in the antique trade as Christie’s representative in Ireland and the publication of a number of books on Irish arts and furniture.  Together with his wife, Madam Olda FitzGerald, he also developed Glin Castle as a guest house and tourist attraction in the 1970s and 1980s to secure its future. In 1998, as a keen family historian, he left The Glin Papers on permanent loan to the University of Limerick. We recall fondly his visits to Special Collections and the festive and glamorous air that always accompanied him.

Desmond FitzGerald, the 29th Knight of Glin died in 2001 and with it the romantic title, which his three daughters could not inherit, fell into abeyance.

I am indebted for information presented in this blog post to archivist Lisa Collins and her excellent introduction to the FitzGerald family in the Glin Papers catalogue.