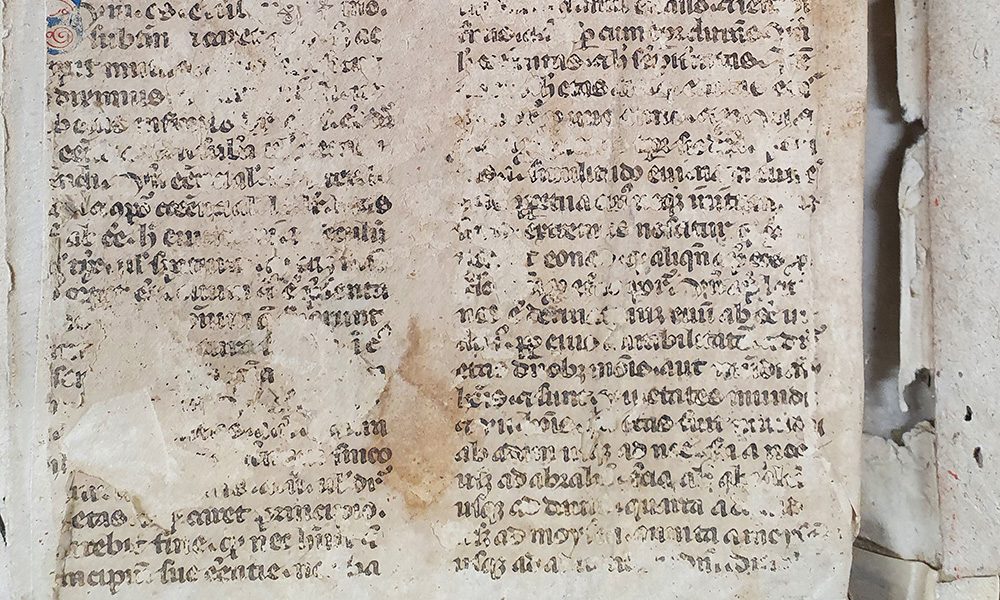 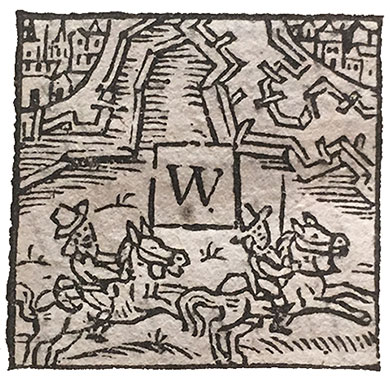 ho doesn’t love a good play on words? Bolton… Bolted On. We know this topic doesn’t concern material bolted on per se, but we like it.

In Bookbindings of the Bolton Library #1, we kicked off our exploration of bookbinding in the collection. Today’s topic is a natural progression of the theme: bookbinder’s waste.

Some of the material in the Bolton Library has taken a rather more circuitous route to the 21st century, leaving the bookshelf proper behind at some point to stow away in the titles which now grace the shelves of our collection. These are the scraps, fragments, strips and squares of what were once whole items in their own right: printed books and manuscripts, charters and legal documents, correspondence and account books, recycled by the bookbinders of our collection to strengthen and support the stars of the show. Such recycling reflected the economy of an age when paper and parchment, even used, were just too precious a material to waste.

While we librarians may employ the term ‘waste’ 1 to describe such fragments, we delight in the distinct journeys they have made, from their origins as complete items, through centuries undercover, to their deserved position as objects of curiosity and study here in the 21st century.

Let us introduce you to the first of these finds.

Bound inside the vellum binding encasing Rervm Brabanticarvm libri XIX (Antwerp : Hieronymus Verdussen, 1610), a weighty tome on the history of the duchy of Brabant by Petrus Divaeus (1536–1581), is this leaf of manuscript 2 waste written in Latin.

Its text, which includes a small red and blue initial – the two colours most commonly used for initials in manuscripts of the 13th and 14th centuries 3 – is now rather degraded, the leaf having spent centuries glued face down onto the inside of the front cover.

When the glue began to dessicate and the leaf loosened, some individual letters and whole words remained affixed to the binding, while others pulled partially away and now stand vertical on the leaf. What remains is a leaf of highly fragmented text, as seen below:

Uncovering from where this leaf might have originated will take some detective work, and only after considerable conservation.

Recycling of material during the early modern period

The repurposing of both printed and manuscript materials during the early modern era was not uncommon. It was a period when both the advent of the printing press saw the redundancy and replacement of numerous works, and the various causes and crusades of those turbulent times lead to the wilful near destruction of others. Unsurprisingly, therefore, it is largely a phenomenon of 16th century bookbinding. 4 This material, disassembled by contemporary bookbinders and used to reinforce the spines and covers of new works, was supplemented by a supply of administrative and legal waste, and fragments of these are now, whether by chance or by design, preserved within the bindings of the Bolton Library. Who knows what we will find next?

The first of its kind

This compromised example was the first piece of waste uncovered during the Glucksman Library’s cataloguing project and was initially viewed with awe by a cataloguer schooled in bookbinding of a far more recent vintage. Said cataloguer spent rather more time on it than was necessary: we have since uncovered many more examples.

Please follow this ‘Bolted On’ strand to discover the many whole and partial fragments of both printed and manuscript waste which we continue to uncover inside the bindings of this collection, or search our catalogue to view all those revealed to date.