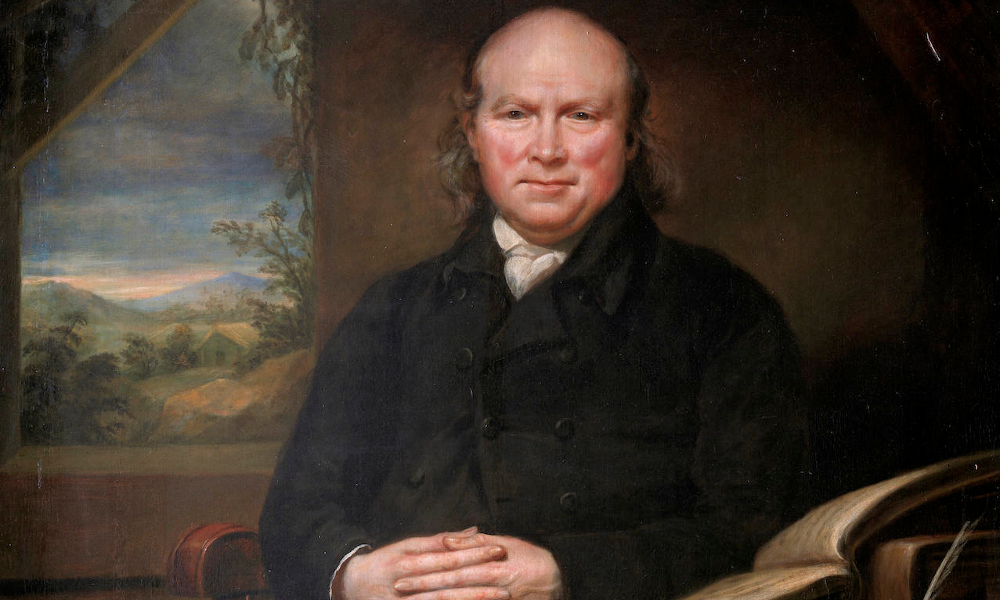 Thaddeus (Thady) Connellan, (Tadhg Ó Coinnialláin), teacher, author and translator, was born circa 1775, and raised as an Irish speaker in the parish of Templeboy, Co Sligo. Details of his early life are scant, but according to an account given to Lady Morgan, he began his education in Sligo and later travelled to Munster ‘where the best schools were then held’.1 He was taught by a school-master from Co Clare and returned to Sligo about 1800 to open his own school in Corkhill.

Lady Sydney Morgan (née Owenson), (1783–1859), novelist and harpist, was born in Dublin but had family links with the north-west of Connacht. Her father, Robert Owenson, (formerly MacEoghan), (1744–1812), an Irish-speaking singer and actor, was born and raised in Tyrawley, Co. Mayo. Her paternal grandmother, Sydney Bell, was a relative of the Crofton family of Longford House, Dromard, Co. Sligo. It was while staying at Longford House in 1806, that Lady Morgan received a visit from a neighbouring school-master, Thady Connellan, who introduced himself to her stating:

‘he had heard I was fond of Irish composition, and that he had waited on me to mention he had some of the poems of Ossian, which were much at my service…the Irish is the finest and loftiest tongue in the world: the English can never come near it, and the Greek alone is worthy of being compared to it.’ 2

Connellan invited Lady Morgan to visit his school and informed her that:

‘he had fifty pupils; that the head class were in Homer and did not pay for their tuition, as they assisted him to teach the rest; that all boys of the name O’Conolan were taught gratis, and the rest paid according to the means of their parents, from one shilling to four a quarter’. 3

Lady Morgan accepted Connellan’s invitation and her account of the visit, (during which she donated some books), provides an interesting pen-portrait of a vernacular school or ‘hedge school’ of the period. Following penal legislation in 1695 which outlawed schools run by Catholics and non-conformist Protestants, a form of popular education emerged in the eighteenth century. Often described as ‘hedge schools’, these consisted of small schools run individually by self-employed teachers. While some of these schools were held in the open air when weather permitted, many were held ‘in mud huts, in barns, in chapels, in the homes of people or, in rare instances, in the teacher’s own house.’4 By 1800 there were ‘an estimated 9,000 such schools throughout the country, attended by 400,000 scholars.’5

In 1807 Connellan met Albert Blest, a Baptist, who worked in the Sligo area with the London Hibernian Society (LHB), ‘for the diffusion of religious knowledge in Ireland.’ Blest made a strong impression on Connellan who converted from Catholicism to the Baptist church and began teaching in the LHB’s school in Coolaney, Co. Sligo. Connellan emphasised the significance of the Irish language. This led to the LHB being described as ‘the first institution which attempted the instruction of the Irish by means of their own vernacular language… by means of a class of schoolmasters trained in one of the schools of the society.’6 Connellan soon moved to an administrative role with the society, training teachers, establishing new schools, and most significantly, publishing educational material in Irish for use in schools.

In 1814, Connellan’s English Irish Dictionary, intended for the use of schools… was published anonymously. The Ó Súilleabháin Collection copy has a particularly interesting provenance as it contains the autograph: ‘John O’Sullivan, Dingle, 1834’ and stamp: ‘Revd John O’Sullivan, Kenmare’.

A copy of Connellan’s grammar for schools (1825 edition), published under the title Litir an Ríogh a nGaoidheilge, ó Shaicsbhearla, is also among the holdings of the Ó Súilleabháin Collection.

The manuscript diary of John O’Sullivan, the well-known ‘famine priest’ and PP of Kenmare (from 1839–74) is held in the Kerry Diocesan Archives.

Scriptural translations to Irish by Connellan held by Special Collections, UL, include the Seanraite Sholaim a Ghaoidheilge agus mBearla – The Proverbs of Solomon in Irish and English, (1815) (Ó Súilleabháin Collection),

The two first books of the Pentateuch, or Book of Moses: as a preparation for learners to read the holy scriptures (1819) (Bolton Library).

Connellan published a number of compilations of Irish language poetry and lyrics. Among them is An duanaire: fiannaigheacht, danta agus ranna, le’r tteanga mhin bhinn mhilis a léigheadh. A selection of Irish poems, and moral epigrams; collected from ancient manuscripts and oral tradition; for the use of schools and learners of the Irish language. (Dublin, 1829). The Ó Súilleabháin Collection copy is signed and heavily annotated by Séamus Ó Casaide.

In an anecdote relating to his concerns over the accuracy of the translation, the Archbishop told of noticing that the translator, (Connellan), skipped over some pages as he read the text back to him. Upon enquiring, he received the following reply: ‘Your grace…it was mighty dry reading, so we just interposed now and then a bit of a poem to help it forward…’7

Thaddeus Connellan died on 27 July 1854 in Skreen, Co. Sligo and Rev Edward Nangle, founder of the Achill Mission Colony, (see earlier blogpost by Seán Cafferkey here), officiated at ‘unruly scenes’ at his funeral. 9 While Connellan’s proselyting activities generated some controversy during his lifetime, his commitment to the Irish language is evident.

Further examination of his life and work may prove useful for research related to the topics of education, literacy and language shift in 19th century Ireland.

Pat Armstrong gives us a first-hand account of what life was like for one Irish soldier in the First World War through his letters home to his mother.

Bookbindings of the Bolton Library #2