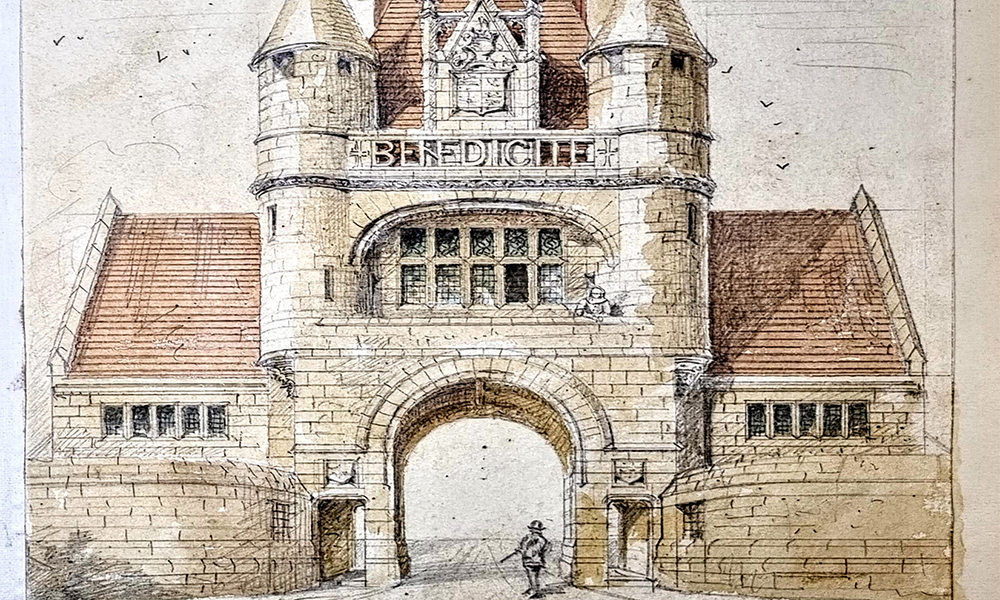 The Dromore Castle scrapbook, compiled in 1868-1869 contains sketches by  Edward William Godwin, the architect of Dromore Castle & several photographs that document its construction by the Pery family. Photographs such as these are very useful for the study of history from the nineteenth century onwards, as the invention of photography by Joseph Nicéphore Niépce in 1826 started a new way of documenting the past.

The Pery family settled in Ireland in the early seventeenth century and since then have left their mark on Limerick city and county. Notably, Edmond Henry Pery was elected to the Irish Parliament as a representative for Limerick in 1786, a position he held until 1794 when, as Lord Glentworth, he took his seat in the Irish House of Lords. It was in 1803, following his vocal support for the Act of Union in 1800, that the family was elevated to the earldom of Limerick. The Pery family name is still well-known in Limerick city, with areas such as Pery Square, Glentworth Street and Mallow Street being named after the family.

The builder of Dromore Castle was the 3rd earl of Limerick, William Pery, who inherited the title in 1866 following the death of his father, also named William Pery. The earl had the opportunity to experience the grandeur of his new home before his death in 1896. He was laid to rest in St. Mary’s Cathedral in Limerick, a site that was the final resting place for the members of the Pery family.

Located in Pallaskenry, Co. Limerick, Dromore Castle was built to designs created by Edward William Godwin, a prominent figure in architecture. Plans for the construction can be seen in the scrapbook, with a variety of drawings from Godwin ranging from floor plans and the inclusion of the family crest. Godwin also included drawings of the interior, showing paintings and furniture he wished to place in it. Godwin’s dedication to the finer details of the house showed his interests in making the house suitable for a king, or in this case, an Earl.

Dromore Castle is a Gothic revival-style structure and includes many interesting features such as a round tower, something that was researched by Godwin before his designing of the house. The location of the house is also notable, being situated on top of a hill. Reasons for this may be that this was a defensive measure, or a way of simply showing off the building’s size and beauty, or an intentional imposition commanding authority on the landscape. As well as this, the proximity to a body of water could also indicate a line of defense, or this could also be for the likes of trade or day-to-day pleasures.

The photographs in the Dromore Castle scrapbook show the building at its various stages of its construction and, as the reader turns the pages, they experience the construction too. The clarity and upkeep of the photographs is highly evident, especially considering they are over 150 years old. There is not only a focus on the house, but also the workers involved in its creation, showing the fashions of the time, and the range of materials made available to them.

On the second page, there is a drawing by the architect and designer Edward Godwin which features the family crest, which includes a knight with a crown on his head indicating that the Pery family were loyal to the monarchy. Another image which shows several workers on the house provides a comparison to the clothes construction workers wear today, and they are certainly nothing like the clothing back then!

While there are several images depicting the progress of the build, and many shots from a distance in order to enhance the castle’s grandeur, the scrapbook also features a small image of the interior. This image shows several pieces of furniture such as a lavish couch and a shelving unit holding several pieces of ceramics.

The scrapbook itself is quite worn and fragile something which is to be expected considering its age. However, this does not take away from the beauty of this historic item as on the inside, it holds precious content for both researchers and the public to experience and enjoy. Each image found in the scrapbook gives viewers a direct look into the past, and a look at the advancements we have made since then.

Considering the dangers associated with owning a camera, such as dealing with dangerous acidic chemicals, the presence of these images is astounding. The images offer an understanding of the times they have captured, the importance of these great houses as places or employment, and the lords and ladies who inhabited them.

While Dromore Castle is currently in ruins and no longer used as a family home, the title of Earl has continued on through generations of the Pery family. At present, the 7th Earl of Limerick is Edmund Pery, having inherited the title in 2003.