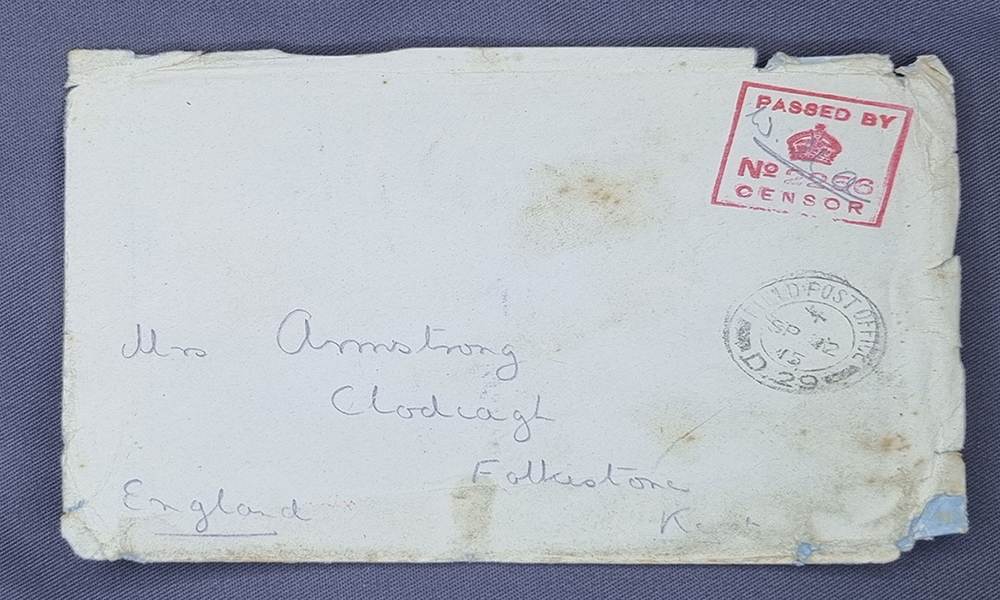 When studying the history of a war, the personal lives of those who fought and died make the narrative of events all the more relatable, and give us a deeper understanding of the lives and mentalities of those involved in conflict. Autobiographical documents like letters are useful for analysing the experiences of individuals and their families.

The archival collection pertaining to the Armstrong Family of Moyaliffe Castle, Co. Tipperary, available at UL’s Special Collections and Archives department, gives us a first-hand account of what life was like for one Irish soldier and his family in the First World War. The focus here is on one letter from William Maurice ‘Pat’ Armstrong to his mother, Rosalie Cornelia ‘Muz’ Armstrong, penned on 11 September 1915 from Gallipoli in modern-day Turkey.

Given his background, it is perhaps unsurprising that Pat followed the distinguished military tradition of his family. He was educated in Eton College in England before joining the military, rising to the rank of Captain in the 10th Royal Hussars (the Prince of Wales’s Own). He served in India until the outbreak of the First World War, when he joined the Expeditionary Force as part of the 2nd Cavalry Brigade. He was on the staff of Major-General Sir Beauvoir de Lisle at Mons and at the landing and evacuation of Gallipoli in the ‘incomparable’ 29th Division.

Due to his high standard of education, Pat was well read and literate, and his letters home provide an articulate and accessible window into one of the most significant campaigns of the was, as well as aspects of life on the home front.

Immediately in the opening lines of the letter, we are given a glimpse into the relative affluence of the Armstrong family. Pat thanks his mother for several parcels he received containing cakes, sweets, boots and a mosquito net, claiming it was ‘just like Xmas’. Many soldiers at the time would not have received such lavish gifts from home.

This is put into stark contrast against life in the trenches however. Pat repeatedly makes reference to the flies which are ‘simply awful’, as well as the impending cold and rainy conditions that are due to arrive with winter approaching. Pat describes the ongoing construction of his dugout, indicating he had not been in Gallipoli very long at the time of writing, as well as indicating his high position in the army, as most soldiers would not have had the comfort of a dugout during the war.

From reading the letter, it is easy to get the impression that Pat’s life in Gallipoli was quite peaceful. He describes his daily activities of going on a ‘walk round’ with ‘the General’, as well as being in charge of a company of 86 men. He does not appear to have frequented the trenches very often, but instead worked behind the line in a commanding role. His affinity with the General is another indication of the privilege he enjoyed. The connections afforded by an Eton education would undoubtedly have led to being in the company of influential people.

The importance of letter writing for maintaining relationships during the war is also apparent from the volume of correspondence Pat kept with his family, both in Ireland and in England where his mother was situated at the time of writing. He describes not having the time to answer all of his mother’s letters, as well as spending a ‘peaceful afternoon’ reading all his letters received from home. From this, it is apparent that the ability to read and write well would ensure good communication with family and loved ones at home.

It also seems to have been a form of recreation to sit and read letters from home, as Pat appears to have passed quite a lot of time in doing this. Like most wartime letters in the Armstrong family papers, though, there is very little mention of actual troop movements, battle descriptions, or detail about the military aspect. This is perhaps owing to the interests and concerns of the specific correspondents. Such in-depth detail can be found however in other sources of Pat’s writing including the hardback leather bound pocket diaries he kept (P6/1414-1418) until he was killed in action on 23 May 1917.

Diaries, being private accounts of activities, notes and thoughts, were not subject to censorship; letters were, however, which no doubt affected the content. This letter, as indicated by the stamp on the envelope, was censored before leaving Gallipoli.

Nevertheless, Pat mentions briefly the prospect of Italian troops coming to aid them as they are outnumbered 3 to 2 by the Turks, and his description of the Battle of Scimitar Hill as ‘that show on the 21st’ shows either his reluctance to describe the war itself in detail, or his awareness of censorship. He quickly reverts back to enquiring about life back in England, and appears quite concerned about his mother’s lack of servants, an obvious insight into upper-class concerns.

Pat’s letter to his mother on 11 September 1915 reveals a large amount of detail, not just about life as a soldier during the war, but also about his interest in and connection with life on the home front. We see how Pat’s privileged background granted him a relatively comfortable position in the war, along with an ability to read and write letters well, affording him ample correspondence with home. To a historian, being able to physically examine a document of this nature, to see the penmanship of a person of the time, the style of writing and the type of paper used, is an indispensable way of bringing the past to life.