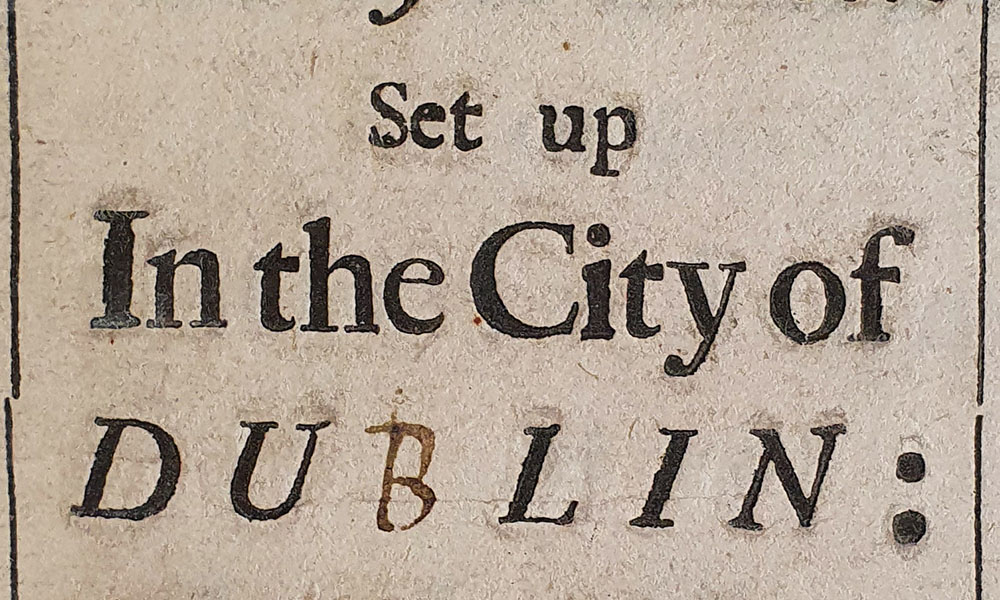 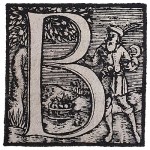 efore I began my work on the Bolton Library, I was aware of an estimated 50 unique items present in the collection,1 and it conjured up images of illuminated manuscripts, Renaissance diaries and unproofed gems. Sometimes, however, the reality can be a little different. Modest in fact, as in the case of An account of some charity-schools set up in the city of Dublin (Dublin : [s.n.], 1705).

At a mere 15 p in length, and with no named author or printer, this pamphlet2 delineates the need for charity schools to deal with the city’s ‘helpless and indigent children’, detailing in particular the case of one charity-school on p. 6 which stands ‘at the Sign of the Buck, in Myter-Alley, near Kevin’s-street’. While the item has been referenced in contemporary literature,3 no other copy has been traced.

An additional curiosity can be found on the item’s title page, where the title has been printed without the letter ‘b’ in ‘Dublin’. A space has instead been left – or it has failed to print – and the letter has been supplied in manuscript.4

It could be viewed as a peculiar omission given the item’s place of origin. Another interpretation might be that it was left so on purpose, to be later embellished with an engraved initial or a flourish of some kind, in keeping with the extravagance of the Baroque era. However, as there are no other copies in existence, we cannot know what its anonymous printer intended.

Sadly, in an attempt to make it fit neatly with the five other items with which it has been bound here, the Bolton Library copy has been somewhat chopped at the fore- and tail edges by the sammelband’s5 bookbinder, and part of its peripheral text is now wanting.

What makes this unique item even more notable is that it is one of a relatively small number of Irish printings catalogued to date in the collection. While this could reflect the personal taste of our individual collectors – read more about the origins of the Bolton Library in A good eye – it could be equally indicative of broader patterns of the use and output of the indigenous print trade in Ireland in the 17th6 and 18th centuries,7 and the societal, religious and political parameters in which it operated.

Cataloguing in the 21st century, we can avail of quick access to digital and union catalogues worldwide, allowing us to search for and compare minute differences in variants, issues and editions. It began to seem very likely early on in the project that the aforementioned tally of 50 unique items in the collection would be surpassed, and indeed it has been, just shy of halfway through its c.12,000 items. Irish printing features strongly in these rarer elements of the collection. Of an estimated 53 unique and probably unique items encountered to date, 22 were printed in Dublin, and one each in Cork and Kilkenny. Not a bad showing at all.